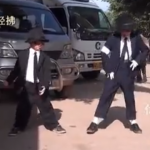 Meet the Chens of Sichuan, such Michael Jackson fans that they learned several of his moves by watching the legend on TV. We introduced you to Chen Zeyang, the seven-year-old, earlier today, as he mesmerized a crowd by dancing to Smooth Criminal. In the above, he's joined by his five-year-old brother as they sing (partly) 最炫民族风 (Most Dazzling Minority). 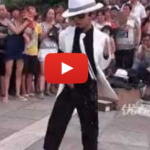 Michael Jackson impersonators abound in China (one of the more famous ones is Master Zhang Hongliang [video], often seen around the popular night districts in Beijing), but I haven't seen one quite this young. In Yibin, Sichuan province, seven-year-old Chen Zeyang attracted quite the crowd recently by dancing to Smooth Criminal. His five-year-old brother apparently loves MJ as well -- here are the two of them in action. The two reportedly practice while watching the King of Pop of pop on TV, and everything they do is self-learned. The Youku video description tells us Chen wants to be a professional impersonator or MJ dancer/choreographer when he grows up.