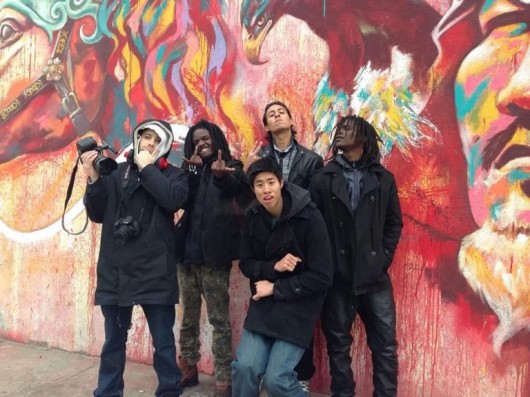 Pacman, Peso, and I recently returned from a 16-day Asia trip that included a five-day stay in the Democratic People’s Republic of Korea (as in America, the N-word is taboo in DPRK). This journey started in August when our record label, Forest Hills Tenleytown Music Group, launched a Kickstarter seeking $6,000 to fund the trip and a music video called “Escape to North Korea.” With the help of a five-page feature in the Washington Post Style section and a generous $5,100 donation from James Passin (aka “The American Who Bought Mongolia”), we were able to raise $10,400 and get a lot of attention in the process. People actually cared, for some reason.

Pacman, Peso, FHTMG Vice President Esteban Glower and I arrived in Beijing on November 17 ready to take Asia by storm. Our host was Ryan Ha, a fellow Washington DC native and co-founder of Comedy Club China, who had motorcycles ready to go despite the fact that none of us had driven motorcycles before. Not surprisingly, we had three accidents within our first several hours. Pacman was held captive for several hours as we negotiated a settlement to damages made to a parked car.

Despite these setbacks, we got many great shots for Pacman & Peso’s music video for “My Nigga” — check out the track off their debut mixtape Coming Soon – set in Beijing and scheduled for release next month. While we were shooting at Tiananmen Square, we got some footage of a naked elderly lady being tackled by plainclothes police as she presumably protested something, though we aren’t sure what. Everywhere we went, zhongguoren couldn’t get enough of Pacman and Peso – many dreadlocks were touched/grabbed and many pictures were taken with huge grins.

A couple days later, we miscalculated the travel time on the airport express. Thanks, Ryan Ha. Despite him falling to his knees with impassioned pleas at the ticket counter, we could not make it on our 8:30 am flight to Shenzhen. But eventually we made it, all the way to Hong Kong, where we stayed at the Yesinn at Causeway Bay based on the solid recommendation of a Beijing drug dealer. Our two-day stay included a gambling trip to Macau, a music video shoot, and a birthday celebration for James Passin. (De La Soul performed at Dragon-I. They, along with their fat DJ, should stop doing parties and start teaching hip-hop history because they sucked b*lls.)

Next we flew to Ulaanbaatar, Mongolia where we were hosted in style at the Blue Sky Hotel. Pacman and Peso had a great performance at a night club and an incredible video shoot for “Ballin” that included Mongolian models and large hawks. Mongolia was the shit, to sum it up in one sentence.

We returned to Beijing on November 24 and visited the Silk Market to purchase tailored suits for our upcoming visit to the embalmed bodies of Kim Il-sung and Kim Jong-il. 2,800 RMB later, we had four fly suits and were ready to fly to Pyongyang. 100 RMB on top and we had 10 ties/bowties/silk rags to take our outfits to the next level.

We arrived in Pyongyang two days afterwards without Ryan (he was denied a visa and blacklisted, apparently) and were greeted by the Associated Press upon our arrival. That’s always nice. We were part of a larger tour of Western tourists, led by Young Pioneer Tours, primarily from Europe, Australia, and New Zealand. The next four days were spent zipping through Korea’s frigid winter air from one location to another in comfortable tour buses. We amassed pictures and footage everywhere we went, including Pyongyang, Kaesong, the DMZ, Sariwon, and Nampo. We were treated well and had no difficulty leaving with all our footage.

There is some truth to the common refrain of the DPRK being “weird,” as you indeed feel like you’re stepping back several decades in time. It is rare to find a building that is heated, and streets are plowed by groups of people with stick-and-leaf brooms. We were never allowed to go out on our own and remained under the supervision of the Korean tour guides throughout our stay. Despite all of this, we were able to interact with many Koreans and left with a positive impression of them (“people are people,” as the old saying goes).

After returning to Beijing, Pacman and Peso preformed at Temple Bar. It was a great show with an energetic crowd (thank you Beijing!). Afterwards, we hit up 4corners to kick it with the expat community. Another trip to the silk market, a belated Thanksgiving dinner, a manicure/pedicure and a fire-cup massage later, we were ready to head back to Washington DC.

Upon returning to the US of A, we were reminded that we live in a police state just like North Koreans, only our nation is filled with fat people.

Ramsey Aburdene is president of Forest Hills Tenleytown Music Group. The above image is courtesy of him (from left to right in back row: the author, Pacman, Esteban Glower, Peso; Ryan Ha is in the front).