The current president of China is Xi Jinping. “Uncle Xi” is most-known for his nationwide crackdown on corruption. Who was president before that? If you said Hu Jintao, you’d be right. Hu is remembered mostly for how unremarkable he was – he oversaw a ten-year period of consistent, if unexciting, growth for China, making little... Read more »

Per usual, no idea about post frequency, etc. But there it is. We've entered the cashless society! 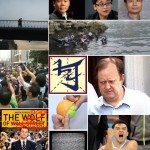 China's 2014 was a year of protests, tigers and flies, tilted fruit trucks, pandas, and censorship. Come to think of it, so was 2013. But not everything about last year was the same. Take these 10 longreads that first appeared on this site, well worth revisiting, among our favorite posts of 2014.