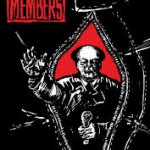 If you transcribed every twisted, bitter, sick thought you ever had about China, tied it to a brick, then repeatedly smashed it into someone’s skull, you might give them an experience akin to reading Arthur Meursault’s debut novel Party Members (Camphor Press). There is no more unrelentingly savage satire of modern China ever written, and perhaps deserves more attention than it... Read more »

The worst possible intrusion of commerce, at the service of a fake commercial holiday, in the guise of cleverness.