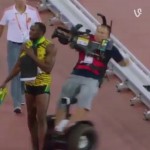 Like watching a badger nip on the ankle of an unaware stag. Segways, man.

Some day, when historians write the story of the rise of Chinese Football -- the team's long path from national laughingstock to World Cup champion -- they'll point to this year's Asian Cup as the turning point. More specifically, they'll cite tonight's game (7:30 pm China time, 9:30 Queensland), during which a scrappy and young squad caught magic and upset the tourney hosts in a sold-out and raucous Suncorp Stadium in Brisbane.

Yeah, I don't think that's how it's done.