Lying on breast implants can cause rupturing, a woman in Beijing learned recently. Xinhua reports that this unfortunate woman met silicone failure after lying on her chest playing a video game for four straight hours. Which game she played, we might never know.

The gaming world in the virtual sphere is filled with life and death, but without real consequences for those who engage in cockamamie strategies. In the real world, a carelessly laid out and executed plan can mean actual death, whose consequence is 15 years in prison, or, as People’s Daily put it, “a lifetime of... Read more » 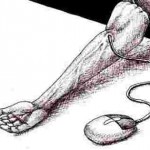 China will have its own system for diagnosing Internet addiction later this year, but here’s an easier way to tell whether you’re addicted: if your hours of nonstop play results in a cerebral hemorrhage. Kotaku has this case example:

We’ve all experienced the apoplexy that comes with a dropped Internet connection, especially in China, where connections can drop in so many ways (such as a non-VPN’ed google search of a sensitive term, which is the worst). But needless to say, few of us have acted on our threats to “kill someone.” The guy in... Read more »