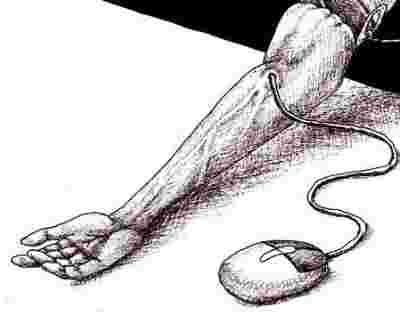 China will have its own system for diagnosing Internet addiction later this year, but here’s an easier way to tell whether you’re addicted: if your hours of nonstop play results in a cerebral hemorrhage.

Kotaku has this case example:

Thirty-six year old IT administrator Xu Yi spent the better part of his weeklong vacation playing video games. According to the Straits Times, Xu’s family said that he would game all night, sleep all day, and when he woke up in the evening he would go out drinking with his friends before going back to his games. They said Xu didn’t exactly love exercise, but he was always in fairly good health—but after his prolonged gaming session, Xu suddenly started complaining about dizziness and a headache.

It turns out Xu suffered a minor stroke. Doctors say he can return to gaming in a month, but for his sake, we hope he picks up another hobby before then.

That system for diagnosing addiction, by the way, came after a 14-year-old boy in Sichuan province admitted to poisoning his mom because she banned him from computer games. Via China Daily (first link):

The boy is accused of pouring farm chemicals into edible oil on Feb 2. It is alleged his actions caused his parents, elder brother and sister-in-law to suffer stomach problems, vomiting and other adverse effects.

So, there’s a second way to know if you’re addicted: when you’re okay with murdering your mother to retrieve your gaming privileges.

Meanwhile, in 2011, a Chinese man died after passing out in an Internet cafe. The virtual world can kill.