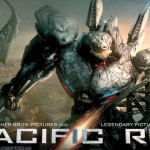 In spite of Pacific Rim director Guillermo del Toro's diplomatic observations about the sad racial and geopolitical architecture of Hollywood's summer blockbusters, his Pacific Rim does not want for just such stereotypes. There is the fact that an entire hour of film passes during which only a few lines are spoken by a woman -- this in a film whose marketing materials sell it with a female co-star. And there's the stereotype-affirming white guy-submissive Asian female duo (alternative film title: South Pacific Rim). It seems, in del Toro's "very equal structure" of world-saving, a vagina is as much a threat to the world as the "breach" on the sea floor from which monsters crawl forth. Then there is the China problem.