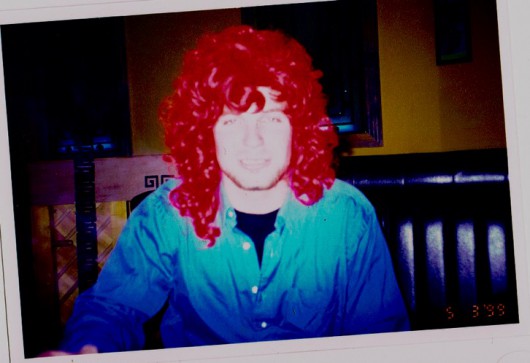 The author, in The Den circa 1999, wearing a wig for reasons unclear and not committed to memory.

I have not set foot in The Den since 2002, and from the sounds of reports from Beijing this week, that was for the better. The Den, a European sports bar? That’s what Hidden Tree was for. Then again, Zhang Yimou makes CPC propaganda now.

Early Sanlitun was a dynamic, rogue, multicultural municipal experiment. And The Den, for a time, was its prince.

When The Den opened in 1997 it was a fresh, sexy, low-lights nook that evoked both opium den romance and illegal speakeasy raucousness. Today this bar-with-Mandarin-characteristics design — red lacquer and carved wood — is replicated in countless pubs across China as well as every Shanghai Tang boutique. New York City’s Pearl River Market sells for cheap the design elements that made The Den unique when it opened. In 1997, Beijing’s framed 1920s cigarette girl antique ads were all real and Alan Chan was just some guy in Hong Kong making retro postcards.

The Den combined two things Sanlitun revelers had already proved they wanted. The refinement of Jazzya and the drunken youthful abandon of Poacher’s unfussy dance floor. (This was the first, illegal, fire-trap Poachers on north Sanlitun before it moved into Chaoyang Park.)

The Den’s owner, Meng Tong, was the closest Beijing will probably ever have to Rick. A friendly and handsome Chinese rake with a mysterious backstory, Meng was a presence over whom even the foreign girls swooned. (Too bad, ladies, at the time Meng was dating the daughter of the US ambassador.)

I spent no small amount of time with Meng in those early years. My roommate and I launched a monthly networking event — Young Professionals Happy Hour — and often held it at The Den. For a time, The Den also sold some of our hats and bags under the label The Chopstick Factory. More than once I jumped behind the bar and served free drinks to crowds swaying shoulder to shoulder, all with Meng’s blessing. One night, we convinced a traveling Hawaiian hula troop to drop by The Den and perform. To promote the event we “borrowed” a neon palm tree from the theater department at the International School of Beijing (then at the Holiday Inn Lido). The crushing crowd and ensuing half-riot ended with the Hawaiians fleeing into Ernie’s next door (formerly Frank’s).

Unlike the cavernous, airline hanger dance halls popping up then (Big Ball; Nightman), The Den was tight. In fact, The Den was too small with ceilings too low to really be a dance space at all, which is what made it a perfect dance space. It was before good DJs came to Beijing, so dancers pinballed off each other in the tight upstairs to whatever the terrible hits of the day were, from the Spice Girls to Ricky Martin. If you bet me The Den played “Mambo Number 5” eight times in one night I would hold my money. Santana and Rob Thomas provided the soundtrack for tipsy young lawyers grinding on diplomatic contractors hoping to someday pass the foreign service exam. Nobody could tell what was the sweat and what was the spilled gin and tonics, and nobody cared. When Chumbawumba got knocked down (but got up again) the floor felt like it might collapse. And it being China, it might have been close. And if it did, well, we were going to the downstairs bar for a refill soon anyway.

The Den’s momentum was not sustainable, of course. Even by 2000, its popularity was ebbing, eclipsed by nearby haunts in the shadow of Workers Stadium, like the Havana Club and Vic’s, the latter having been opened by Meng himself.

Fun at the early Den was not just its unpredictability but also its inclusion. Unlike the predator-prey dynamics of most of the period’s expat bars, The Den was home to young professionals both Chinese and foreign. Students who grabbed a miandi (面包车 taxis) over from the west side universities rubbed shoulders with Chinese junior associates at foreign firms, expat interns at NGOs, and China Hands-in-training. Chinese and expat colleagues now often socialize together, but in 1997 that was rare. But not rare at The Den. Unlike the crowds at other Sanlitun nightspots, a surprising number of expats in The Den spoke at least a workable amount of Mandarin. The in-it-togetherness of the early Den created an atmosphere of respect, if a naughty one.

Abe Sauer has lived on and off in China for a quarter of his life starting in 1987. He’s an author and on Twitter @abesauer.