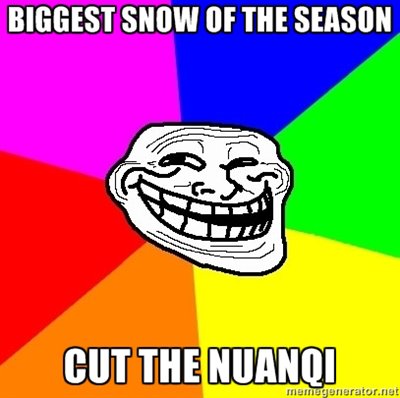 Tickets are NOT available for tonight’s CBA finals opener from the MasterCard Center (formerly Wukesong), so if you aren’t going, you might as well read links. (The game starts at 8 pm.)

That kid who kicked the other kid in the face? Arrested (released on bail). “Others demanded that the government stop funding the education of foreigners. // However, the head of the Kitchee sports club, Ken Ng, played down the racial element of the incident. ‘Do not read too much into it,’ he told AFP. ‘It is one boy kicking another boy.’” [Malcolm Moore, The Telegraph]

Chinese soccer team targeting Frank Lampard and Rio Ferdinand. “‘I want the best team in China and we are prepared to invest a lot of money to bring Ferdinand and Lampard to us,” [Guizhou] club chairman Wang Guolin told The Sun newspaper. ‘Many people here watch the Premier League and know how good the two players are.’” [ESPN]

Ai Weiwei briefly had more than 10,000 followers on Sina Weibo. “Ai told NBC News that he had been told that — since new rules were introduced over the weekend on the mandatory real-name registration of every account on the Twitter-style Sina Weibo website — his name was no longer being blocked on the site.” [Ed Flanagan, MSNBC]

“Do you believe China should become a Western-style democracy through reforms?” “The very fact that this opinion poll [Chinese] was published by a conservative Chinese newspaper confused microblog users. Many asked for confirmation from Mr. Hu Xijin, the editor in chief of Global Times. Writing on Sina Weibo, China’s Twitter, @一人一票民主连线 asks, ‘Do I dare to believe that the mouthpiece has become Deep Throat?’ @欧阳贝丹 tweets, ‘The word “poll” appears in Chinese media, what does it harbinger?’ @做还不乱 wondered, ‘Did Editor Hu have too much to drink?’” [Tea Leaf Nation]

Probably Jesus or Shakespeare. “Over the past two days, 864 aspiring matriculants took part in Tsinghua University’s independent recruitment exams, the People’s Daily website reports. Among the questions they were asked in interviews: ‘If you could travel back to ancient times, what era and what place would you travel to? Who would you meet or what would you do and why?’ Asked why the university would ask such a question, Tsinghua admissions office director Yu Han told reporters the topic was a good test of students’ understanding of history, ability to think and ideals.” [Sohu via WSJ]

The Guardian on the whole Ferrari thing. Wouldn’t have expected this sort of humor out of them. [Guardian]

Du Feng’s retirement from the CBA gives us the chance to revisit this: “Casual and hardcore Western CBA fans alike will recognize Du Feng as the guy who was slapped to the ground by Charles Gaines, who played for the Xinjiang Flying Tigers at the time, after Du head-butted the American in the closing seconds of Game 2 of the 2010 CBA Finals. Motionless on the floor, Du was wrapped up in an Anta towel, carried off in a stretcher and given oxygen in the team’s locker room before being taken taken to a hospital, where he was diagnosed with a mild concussion. No suspensions were given out by the league and both Du an Gaines played Game 3 in Urumqi.” [NiuBBall]

Your Teresa Tang cover of “The Moon Represents My Heart” near Sanlitun SOHO interlude: