In spite of Pacific Rim director Guillermo del Toro’s diplomatic observations about the sad racial and geopolitical architecture of Hollywood’s summer blockbusters, his Pacific Rim does not want for just such stereotypes. There is the fact that an entire hour of film passes during which only a few lines are spoken by a woman – this in a film whose marketing materials sell it with a female co-star. And there’s the stereotype-affirming white guy-submissive Asian female duo (alternative film title: South Pacific Rim). It seems, in del Toro’s “very equal structure” of world-saving, a vagina is as much a threat to the world as the “breach” on the sea floor from which monsters crawl forth.

Then there is the China problem.

With a name seemingly leftover from what was supposed to be a China scene from Real Steel, Pacific Rim’s Chinese “jaeger” robot is called Crimson Typhoon. (“Red Typhoon” was maybe too over the top, and anyway it had already been used in a Lily Cai Chinese Dance Company production commentary on the 40th anniversary of the Chinese Cultural Revolution.) It’s manned by three Chinese jaeger drivers who are identical triplets (played by Toronto’s Charles, Lance and Mark Luu). Yes, while every other jaeger in Del Toro’s culturally-sensitive world of Pacific Rim is operated by a pair, China’s bot is piloted by three men who quite literally — get ready for it – look the same. 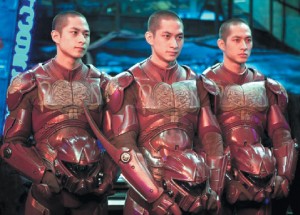 Proving how little movement American pop culture has made with regard to China in the last century, the casting of the Crimson Typhoon terra-cotta army of three calls to mind Five Chinese Brothers, Claire Bishop’s 1938 children’s book for Americans.

Five Chinese Brothers‘s plot turns on five Chinese siblings who hatch a plot to save one of their own from charges of negligent homicide. The key to their scheme is that they all look so identically alike they can confuse authorities. The book features illustrations as culturally informed as Little Black Sambo, and was a fixture in US primary school classrooms as late as the 1980s. In many places, it still is. 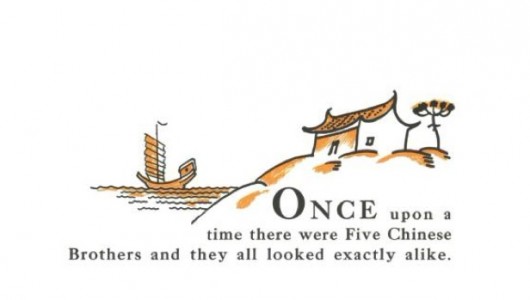 But then, what can be expected from a film that casts Ron Perlman as “Hannibal Chau.” (Not for nothing, the original script described Chau as Asian.) On the bright side of progress, Pacific Rim is no Dragon Seed, Conqueror or Tea House of the Yellow Moon. And, anyway, to paraphrase Pacific Rim supporting star Charlie Day’s regular gig, “A lot of great actors have done Asian face.”

It’s a testament to Del Toro’s range that it’s difficult to decide which is worse, the identical Chinese pilots or the white man who’s been cast to deflect charges of prejudice from a Chinese villain that embodies every Chinese Exclusion Act-era, Fu-Manchu, wake-up-without-a-kidney trope about the underhanded Chinese. Chau black markets in powdered kaiju horn for male potency — hint hint! — and opines on how his Chinese customers are more or less savages, treating the kaiju as gods. Just to make sure the stereotypes sink in, the one Chinese extra who gets a line in the underground shelter with Charlie Day is dressed in a traditional peasant jacket with her hair in pigtails straight out of the Cultural Revolution era. The Chinese elements of the film are not “ninja pussy”-level stereotypes, but then, when that’s the yardstick… And let’s not even get into the ironic flipped script on the American nuclear metaphor underlying the most famous kaiju of all time (Godzilla) and the uncomfortable “immigration” walls and Pacific menace metaphor floating just under the waves in Pacific Rim. (Of course it was just coincidence Pacific Rim’s kaiju first appears in San Francisco, the site of Angel Island.)

The triplets were given no lines in the film — something a few Chinese viewers have complained about — though there appears to be a good reason for that decision. Their lack of language skills makes the decision to include them just a little bit more pitiful.

After one day’s screenings in China, feedback from Chinese audiences was generally positive, with some showing excitement for Crimson Typhoon and a recognition of the undeniable handsomeness of the triplets. But many others weren’t impressed. As one Weibo user wrote after seeing the film, “The Chinese elements are all ‘soy sauce,’ it’s a little nauseating.” “Soy sauce” — Chinese slang for throwaway roles in a film — was a common comment about the China-ness of the film.

Last year, the LA Times got in a snit and called out Hollywood for “conspicuously flattering or gratuitous additions” of Chinese and Asian characters and locations in a naked attempt to appeal to Chinese audiences. That condemnation came as a result of several Hollywood films trying to incorporate Chinese themes or locations. One of those films was Men in Black 3, which, despite the modern-day setting, featured a Chinese restaurant owner dressed like a character straight out of Five Chinese Brothers.

This suspicion that Hollywood is — what’s the word… – kowtowing to China by injecting its films with China-friendly themes is now at the point of tin foil paranoia. One popular movie website speculated Pacific Rim’s basketball playing scene was added because it’s “a wildly popular sport in China.”

If “Hannibal Chau” is one of the flattering additions for the Chinese, the largest film market in the world may just tell Hollywood in the future, “Thanks, but kindly stop.” In fact, there are signs they already are as domestic films have begun regally outperforming Hollywood imports.

Finally, in case you were wondering, Five Chinese Brothers rates four-and-a-half out of five stars at Amazon and remains on the National Education Association’s list of Teachers’ Top 100 Books for Children.

Abe Sauer is the author of How to be: North Dakota.

6 Responses to “Hollywood Will Always Be The Same, Just Like Its Asian Characters: Pacific Rim, Reviewed”