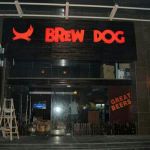 Editor’s note: Yesterday, the UK brewery BrewDog issued an open letter on its website to call out a “fake” BrewDog pub in Changzhou, Jiangsu province. “I’ll be along to visit soon – I’m looking forward to trying the 6AM Saint and the Funk IPA,” wrote James, one of the owners. “I do still nurture a small hope, though, that imitation is the starting point for imagination for you. If next time, rather than knocking up a do-it-yourself BrewDog bar with an odd red logo, you go one step further and have a stab at your own craft beer, then you will really be onto something.” What follows is the China Craft Beer Association’s reply, written by Great Leap Brewing owner Carl Setzer.