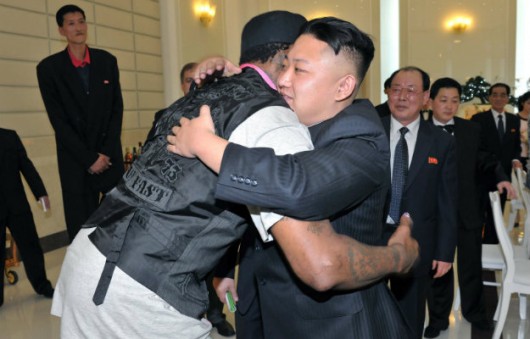 Dennis Rodman, fresh off his tour of Pyongyang, can’t stop singing the praises of that “awesome kid” Kim Jong-un. Unsurprisingly, some Americans just don’t want to hear about it, such as the bartender at the restaurant bar in Time Hotel in Manhattan on Sunday. According to the New York Post:

“He was at the bar at Serafina for three hours,” says a spy. “He kept saying what a nice guy Kim is, and how Kim just wants to talk to President Obama about basketball. He was waving around a signed copy of the dictator’s huge manifesto, telling everyone they should read it.”

If this is true — hell, even if it isn’t — what we are seeing is Dennis Rodman as the worst type of tourist. Hey, did you know in China, you can get ice cream cones from McDonald’s? Yeah, I know, right? They’re becoming more and more like us!

Added the witness, “Dennis was making a total jerk of himself. He wouldn’t leave, and he wouldn’t let anyone talk to him about shutting up, or what an oppressive country North Korea is. Eventually he had to leave the bar because the bartender was starting to get [bleep]ed-off.”

For the record, Dennis Rodman’s people deny such a thing occurred:

After checking out of the Time on Sunday night, Rodman headed to the Marriott Downtown. A rep for him said, “He ended up going to the Marriott because he was leaving in the morning and we wanted him to be closer to the airport.” Another rep said, “The Time is Dennis’ favorite hotel . . . There were a lot of people taking pictures, his security just didn’t like it and asked to move him out of the hotel. There was certainly no incident.”

UPDATE, 1:22 am: By the way, here’s a video of him arriving in Pyongyang (h/t Washington Post).