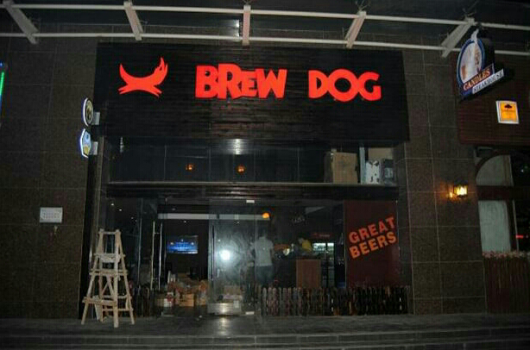 Editor’s note: Yesterday, the UK brewery BrewDog issued an open letter on its website to call out a “fake” BrewDog pub in Changzhou, Jiangsu province. “I’ll be along to visit soon – I’m looking forward to trying the 6AM Saint and the Funk IPA,” wrote James, one of the owners. “I do still nurture a small hope, though, that imitation is the starting point for imagination for you. If next time, rather than knocking up a do-it-yourself BrewDog bar with an odd red logo, you go one step further and have a stab at your own craft beer, then you will really be onto something.” What follows is the China Craft Beer Association’s reply, written by Great Leap Brewing owner Carl Setzer. (Note: Not associated in any way with fake BrewDog in Changzhou.)

This is a response to your open letter to the beer emperor of “The BrewDog” pub in Changzhou, China. My name is Carl Setzer and I, along with other brand owners and brewmasters in China, including Leon Mickelson and Michael Jordan who are co-signatories on this letter, represent the China Craft Brewers Association. We are thrilled to see that you are planning to come to China and visit the Changzhou beer bar that has paid homage to your brand. We are also happy to see that you are planning on rolling out a brand manager for China/Japan in the near future. But in the meantime, might I extend a challenge that is a bit more urgent, but also a bit higher in value:

You yourselves come to China to market and educate the drinkers here about your brand.

BrewDog has been available for long enough in China to warrant a little bit of representation from the motherload of punks that created and currently represent the brand. I personally, and as a representative of the CCBA, would be honored if you carved out some time and actually came to our back-to-back Shanghai and Beijing Craft Beer Weeks next year, May 23rd-June 7th. It would be a positive thing that actually showed that the western brands who have been moving product in China for some time now are interested enough to show up in person, rep their brand to the people who consistently drop their hard earned money to buy it, do some quality control by visiting the storage and logistics facilities that are responsible for handling it, and rolling out a real marketing and advertising plan.

It’s easy to throw letters up on the Internet. It’s even fun. We had fun writing this one. But the only thing that is going to change China’s craft beer culture is a real presence in the country. China is a great place. All of us in China have made the investment, sacrifice and effort to simultaneously build our brands and educate the local markets. Throw your hat in the ring with us and you’ll be happy you did.

Lock in the dates and we can elaborate for you…

13 Responses to “Dear (Real) BrewDog: An Open Letter From China”