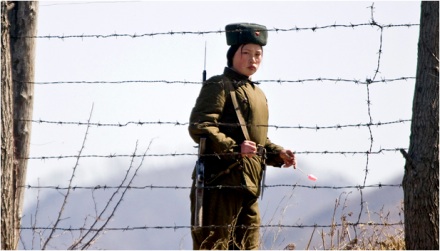 South Korean soldiers hate North Korea so much, they’ll kill you to spare you from living there.

Or something. We can’t figure out why else a unit of about 30 soldiers would fire “hundreds” of bullets at a man, presumably unarmed, swimming away from them.

AFP has this story:

In the first official press briefing since the highly unusual incident on Monday, Brigadier General Cho Jong-Sul defended the border guards’ actions, saying they had followed the correct protocol.

Nam Yong-Ho, a 47-year-old South Korean man, was fatally shot at around 2:30 pm (0530 GMT) while trying to swim across the Imjin river that makes up part of the western border with the North.

Cho said soldiers manning a nearby guard post had repeatedly shouted warnings at Nam to turn back, but he ignored them.

The commander of the unit then ordered his men to open fire, and 30 of them discharged their weapons.

WSJ reports that Nam “had tied himself to a home-made Styrofoam life preserver.”

Some local media reported it is the first time since the 1990s that the military has shot a civilian to death to bar defection attempts. But an official at the Joint Chiefs of Staff declined to confirm the report and just said: “We need to find out more but there’s no record of such a thing happening for a very long time.”

New York Times notes that South-to-North defections are rare, with the last recorded instance happening in 2009.