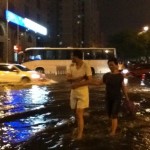 Update: there’s now a video after the jump. The storm that wrecked Shandong, Tianjin, etc. has apparently found its way to Beijing. Today, water got dumped on our collective heads. Lots and lots of water.  As the Beijinger’s Josh Ong tweeted, “Right about now I’m wishing I had this inflatable boat.” Kris Pickett, who found... Read more » 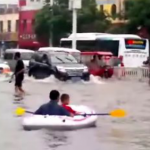 Torrential rains in Linyi, Shandong province have caused massive flooding, but not everyone's mood has been dampened. In the above video, while others slog through knee-deep water or try their damnedest to plow through it in cars, a father and son row an inflatable boat, content to go nowhere at all. More than a few onlookers have smiles on their faces as they take pictures with their camera phones. I don't want to venture all the way down Corny Alley, but as Weibo user Xieyin notes, "The most fortunate thing a person can have in life can't beat having an optimistic father; this scene makes me think of [the movie] 'Life is Beautiful.'"