Like most visitors of North Korea, Sophie Schmidt, daughter of Google chairman Eric Schmidt, thought the country “weird.” It’s her that everyone is quoting today, specifically this write-up on Google Sites:

It’s impossible to know how much we can extrapolate from what we saw in Pyongyang to what the DPRK is really like.  Our trip was a mixture of highly staged encounters, tightly-orchestrated viewings and what seemed like genuine human moments.  We had zero interactions with non-state-approved North Koreans and were never far from our two minders (2, so one can mind the other).

The longer I think about what we saw and heard, the less sure I am about what any of it actually meant.

On the technology front:

Their mobile network, Koryolink, has between 1-2 million subscribers. No data service, but international calls were possible on the phones we rented. Realistically, even basic service is prohibitively expensive, much like every other consumption good (fuel, cars, etc.). The officials we interacted with, and a fair number of people we saw in Pyongyang, had mobiles (but not smart phones).

North Korea has a national intranet, a walled garden of scrubbed content taken from the real Internet. Our understanding is that some university students have access to this. On tour at the Korea Computer Center (a deranged version of the Consumer Electronics Show), they demo’d their latest invention: a tablet, running on Android, that had access to the real Internet. Whether anyone, beyond very select students, high-ranking officials or occasional American delegation tourists, actually gets to use it is unknowable. We also saw virtual-reality software, video chat platform, musical composition software (?) and other random stuff.

What’s so odd about the whole thing is that no one in North Korea can even hope to afford the things they showed us. And it’s not like they’re going to export this technology. They’re building products for a market that doesn’t exist.

They echo comments from her dad, who wrote on Google Plus:

As the world becomes increasingly connected, the North Korean decision to be virtually isolated is very much going to affect their physical world and their economic growth. It will make it harder for them to catch up economically.

We made that alternative very, very clear. Once the internet starts in any country, citizens in that country can certainly build on top of it, but the government has to do one thing: open up the Internet first. They have to make it possible for people to use the Internet, which the government of North Korea has not yet done. It is their choice now, and in my view, it’s time for them to start, or they will remain behind.

I’m guessing, on the list of items North Koreans are clamoring for, Internet isn’t No. 1. They don’t know what they’re missing: Pyongyang Racer, anyone? 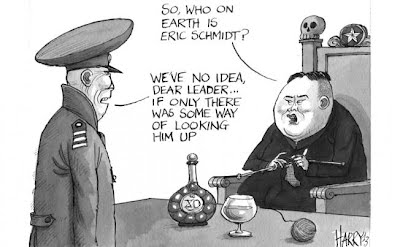 2 Responses to “The Schmidts write about their North Korea trip”