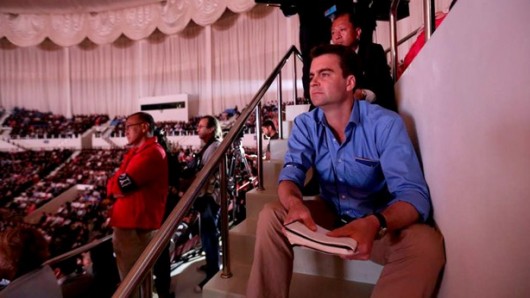 The Great Marshall stopped. He slowly turned and smiled, his visage a million shining suns. The room, which had been full of raucous cheers, came to a hush. In perfect English he replied, “Yes? How may I help you?”

Visiting Pyongyang always has an element of surreality. The Democratic People’s Republic of Korea is just such a different way of organizing a society, the last such social experiment of this sort, stubbornly hanging on in contravention of all predictions.

But when visiting, especially for the first time, many things are far more normal than you would expect (which is strange in and of itself), and some things can appear even more depressing. How you process what you see and encounter depends on who you are.

If who you are is a journalist, North Korea basically represents the hardest reporting target in the world. If you’re writing from the outside, you have to plow through acres of rumor and guesswork to try to assess what’s happening. It’s difficult to get into North Korea as a journalist, and if you are accepted, you end up on heavily-managed tours or junkets. If you sneak in on a tourist visa, you generally get to reveal nothing special (thousands of Western tourists go every year), and moreover, you probably harm the interests of whatever company or organization invited you. Take, for example, John Sweeney of the BBC. He snuck in on a London School of Economics trip and made the most unrevealing, contrived hack job of an undercover report you could imagine. Let’s see if LSE gets to bring people in next year.

Certainly, the BBC was absent last week as foreign media were invited to cover the 60th anniversary of the armistice that stopped fighting in the Korean War.

Channel 4 News, however, was there, and it was with its reporter, John Sparks, that I was chatting with in the newly christened war museum one afternoon. They had just finished the opening ceremony, presided over by Kim Jong Un. I thought that because we were allowed to go in so soon after the ceremony meant Kim had already gone out the back. Every other event that week had us arriving long before the man himself, and then we were kept in our seats until he’d left.

But suddenly there was applause and cheers in the hallway next to where we were standing. It could only mean one thing. We quickly darted over, and there he was, with a scrum of people all around, looking frankly quite comfortable with it all. It was such an exciting surprise, it was hard to believe it was happening. Then, at my left shoulder:

“Mr. Kim Jong Un! Channel 4 News, UK! What message are you trying to send to the West?”

To my credit — if I may say so — I turned to Mr. Sparks and asked in that incredulous teenager’s tone: “Really?”

Now, I understand that “doorstepping” is an acceptable tool in the modern journalist’s box, even if to me it seems desperate, intrusive, and unilluminating in pretty much all circumstances. (Oooo, look how uncomfortable he looks… must be guilty.) They rarely produce answers, certainly not from sitting heads of state, and certainly not in freaking North Korea*. I mean, Sparks knew he wasn’t going to get an answer.

But looking at his DPRK dispatches, it’s easy to see that actually learning anything about North Korea or attempting some form of illuminating representation was never a part of his agenda.

The video on Channel 4’s site also contains downright disingenuous moments. When describing the military parade, Sparks says, “Not everything was as it seemed. The sound of cheering crowds had been prerecorded, some band members didn’t seem to be playing their instruments, and bits of soldiers’ gear looked suspect, like these plastic-looking grenades.”

Having also been at the parade, I can say that those grenades look fake because they were pinned to the belts of middle school marchers. Channel 4’s shot selection was intentionally misleading. And some band members didn’t appear to be playing their instruments because they played pieces in shifts. It was two hours in the relentless, blazing sun. Have you tried blowing a trumpet for two hours in 33-degree weather with no water? No, you haven’t, because that’s mental. (One musician apparently collapsed afterwards.)

I don’t want to be too hard on John Sparks, though. After all, as the correspondent for all of Asia, he’s got a lot on his plate. As I said, covering North Korea is exceptionally difficult. The problems associated with that country are complex, and TV news is especially poorly suited to covering them. TV is good for explosions and parades, but the conventional sound bites it must trade in just don’t get to the heart of any of North Korea’s problems. It is too easy to just look at the nukes, the weird culture, the failed economy, and call the people zombies or slaves.

(Sparks, by the way, calls his minders “Number 1” and “Number 2,” and writes that after seeing Kim Jong Un brisk by, “They were speechless. I don’t know if it was the fact that I had asked the ‘great marshal’ a question – or because they had found themselves so close to him but they looked stunned.” I talked to other journalists that week who learned their minders’ names and developed good rapport with them — you know, treated them as actual people.)

There are also general professional pressures that make it very hard for news about North Korea to be free of bias. These include a dependence on official sources for information and alignment with the state on foreign affairs, which are exacerbated during wartime. Despite Pyongyang trumpeting their victory (or were they really trumpeting?), the celebrations last week were merely for an armistice. The war, technically — and sometimes kinetically — continues to this day.

North Korea doesn’t help itself by being so secretive. The desire to control all information not only rankles journalists, but creates distortions by forcing a news-hungry world to wade through the muck of rumor and guesswork. This is why we so desperately need more journalists willing to look deeper, do more research, and tell us longer stories with more complicated analyses.

There are a few out there. But don’t go looking for them on Channel 4.

*North Korea nerds: no need to write and tell me Kim Yong Nam is the actual head of state.

5 Responses to “Oi! Kim Jong Un! – How Not to Do Journalism in North Korea”