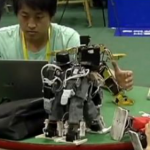 China loves its robots, and we don't mean Hu Jintao. As ITN reports, this country "currently tops the world in robotics competitions in terms of how many people take part." Take, for instance, the first Beijing College Student Robotics Competition over the weekend at Beijing Information Science and Technology University. About 300 people from 99 teams from Beijing and Taiwan took part, showing off robots that could dance like Michael Jackson and play five-a-side soccer. There was even one that performed moves (poorly, I'd say) to PSY's Gangnam Style. 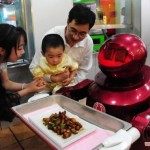 The singularity approaches ever closer. At a restaurant in Harbin, Heilongjiang province called Haohai Robot Themed Restaurant (昊海机器人主体餐厅), robots greet customers, cook and serve food, and generally charm. Even WALL-E, the lovable protagonist in the Pixar movie by the same name, calls this place home*. We’re told that the restaurant employs 18 robots, each with... Read more »