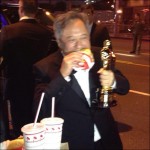 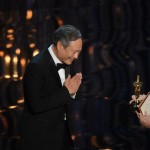 The Taiwanese-born Ang Lee, who previously won Best Director for Brokeback Mountain, has claimed his second Oscar, this time for Life of Pi. He beat out the favored Steven Spielberg, who directed Lincoln, and Michael Haneke (Armour), David O. Russell (Silver Linings Playbook), and Benh Zeitlin (Beasts of the Southern Wild). In one of the more notable acceptance speech moments this year, Lee thanked the 3,000 people who worked on the film with him, plus Taiwan. He ended with a "thank you" in Chinese and the Indian valediction "namaste."