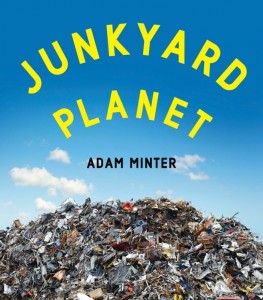 Junkyard Planet, the first book by Bloomberg Shanghai correspondent Adam Minter, offers a look at the often unheard and unseen $500 billion global scrap and recycling industry, which has formed in the shadow of burgeoning Western — and increasingly Chinese — consumerism. Minter is himself “a proud junkyard kid” from a Minneapolis scrap trading family that established themselves through hard graft in the post-Depression period. This background provided him the connections to offer an invaluable insider perspective on this unknown trade — and also informs his somewhat Romanticized, American Dream-inspired perspective.

But a personalized voice keeps the book from sinking into tedium. Minter first came to China in the mid-90s while working for his family scrap business. It was a time when American consumption and its inevitable byproduct, waste, was skyrocketing, and a time when China, opening up to the world, offered willing and cheap labor for the dirty work of recycling. Since then, the shipment of American waste to China has come to form the foundation of China’s huge recycling industry.

Throughout the 1990s and into the 2000s, American scrap that came to China was broken down into its most useful elements and sold as raw materials to Chinese factories which would then use it to make products such as toys, tools, and car engines for resale to the West. This is a neat ecosystem, which Minter presents with unceasing enthusiasm.

In the last few years, however, the path of this scrap material has been changing. The products made, wholly or partially, from recycled American goods are increasingly sold within China. And one key metal, the electricity-conducting copper — the main recyclable from Christmas tree lights — is finding its resting place in China’s high-speed train networks and in the wiring of her sprouting high-rise metropolises. In 2012, China accounted for 42 percent of the world’s copper demand.

Minter is in admiration of the scrap trade, its truly global reach and its ability to create wealth from junk –modern alchemy. But he’s also concerned with the side effects, in particular the environmental tragedies for which recycling is responsible, such as the transformation of Wen’an county in Beijing from a “bucolic… agricultural region renowned for its streams, peach trees, and… rolling landscape” into a plastic-scented “dead zone.” There are also devastating health effects. The township of Guiyu, Guangdong, a hub of “e-waste” recycling, reportedly has seen 88 percent of its children under six suffering from some form of lead poisoning.

All of the above is to say the author’s own views are more than a little ambivalent. It is hard to square fears of environmental pollution, labor conditions and health risks with Minter’s statement, “Whether I need the upgraded iPhone of not (and I really don’t), I want the upgraded iPhone.”

Moral ambivalence characterizes the book throughout in part because of the complexity of the global system Minter describes, and in part because of his personally ambivalent position as both “junkyard kid” and journalist. But not one to shy away from a strong opinion, he rails against Apple for its concerted efforts to monopolize the repair and recycling of its products by making them too complex for untrained workers to dismantle.

Junkyard Planet offers an informed insight into a massive global system of trade, of which very few of us are aware. The book is littered with surprising examples of what happens to our junk. In the end, we’re offered a positive portrait of the unglamorous, often filthy, and sometimes wealthy industry of recycling. Ultimately, “if China didn’t import… resources, it’d have to dig and drill them.” And we are all fully aware of the environmental damage that can cause.

Tom Baxter is a Beijing-based freelancer writer. He is also co-founder and editor of Concrete Flux, an online journal on urban spaces and the experience of urbanity in China. You can follow him @TomBaxter17.

One Response to “Moral Ambivalence In Trash: Junkyard Planet, Reviewed”