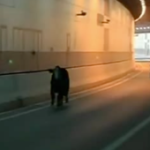 This is kind of a sad story not at all befitting the circus music in the video, with no comedic kick. A bull in Wuhan, Hubei province managed to escape from its slaughterhouse on Saturday — who knows what inspirational dash it made, eluding its human captors while cheered by his fellow inmates as if... Read more »

In Spain, people watch bullfights for the pageantry and the matador’s distinctive flair, and, perhaps for some, the climactic coup de grace. In Guizhou, on this August 11 day, at least, people watch for the comedy of poor rural handlers scampering at and away from a charging beast. (Kind of like this, actually.) How many... Read more »

In Jinhua, Zhejiang province on Saturday, a bull was loosed on the streets, and it was none too happy. Also not happy, we imagine: the man just minding his own business when the bull knocks him off his bike. A bit of hilarious hopscotching follows. Alas, it ends all too soon. Run, man, run! 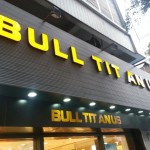 I don't know, maybe Bull Tit Anus is the perfect name for a store. I'd certainly pop a head in if I saw it on the street.