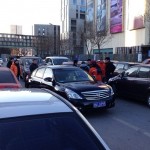 The above was taken by Austin Ramzy after he spotted a congestion near Dajiaoting International Business Hotel on Guangqu Road and East Fourth Ring. It was caused by two peeved motorists who quite demonstrably don't care about other motorists. 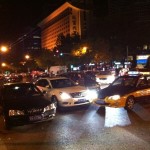 Picture taken at the main Sanlitun intersection on Gongti during eveningtime. A sedan nicked a U-turning taxi cab, after which the drivers of both cars -- while waiting for police -- chose to not move their vehicles. Try to imagine with me the anger of everyone behind them. Traffic may have been backed up to Third Ring Road. 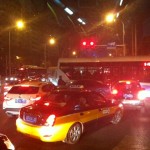