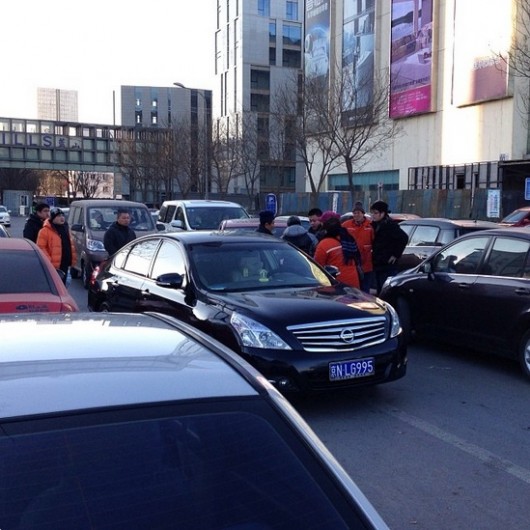 The above was taken by Austin Ramzy after he spotted a congestion near Dajiaoting International Business Hotel on Guangqu Road and East Fourth Ring. It was caused by two peeved motorists who quite demonstrably don’t care about other motorists.

“Short scuffle, apparently because one car cut off another as they were pulling out of a parking lot,” Ramzy tells us. “It was very silly. As I was walking away one guy was demanding the other compensate him for his glasses, which were damaged in the fracas.”

Maybe they were really good glasses… but why would they damage so easily, then? Some things we’ll never know.

Beijing Traffic is dedicated to documenting the Chinese capital’s perpetual and eternal gridlock. Got pics of horrible, frightening, maddening traffic? Send em here. Remember, there are no road rules in China, only magic.

Previously: Minor Accident Fucks Up Everything