Back in October, a woman in Portland found a letter written in English by someone claiming to be a labor camp inmate in Shenyang. “If you occasionally buy this product, please kindly resend this letter to the World Human Right Organization," so it went. "Thousands people here who are under the persicution of the Chinese Communist Party Government will thank and remember you forever.” The veracity was initially unverifiable. 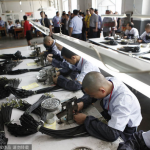 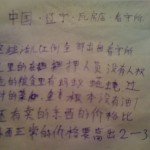 The Oregonian has this tale of a letter from China -- written in English -- folded into eighths and planted inside the box of a Kmart "graveyard kit." This "message in a bottle" traveled more than 5,000 miles to the home of Julie Keith in Portland, who purchased the Halloween kit but left it unopened for a year. When she finally opened the contents, she found this chilling letter: