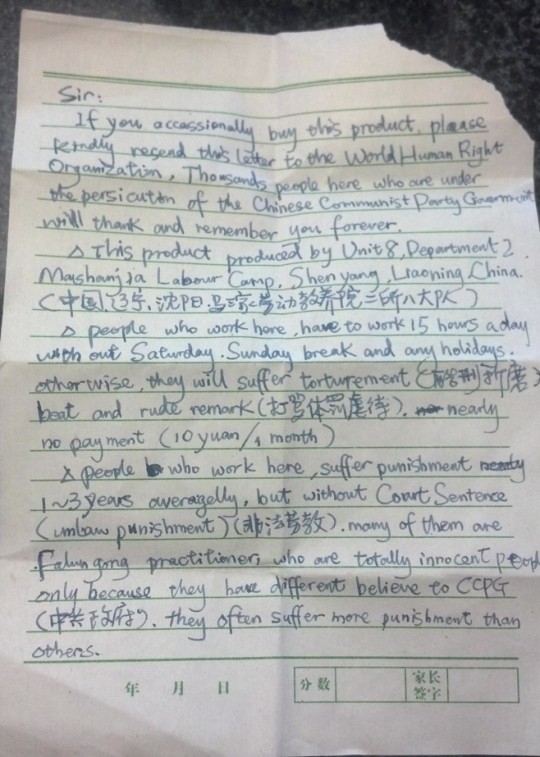 The Oregonian has this tale of a letter from China — written in English — folded into eighths and planted inside the box of a Kmart “graveyard kit.”

This “message in a bottle” traveled more than 5,000 miles to the home of Julie Keith in Portland, who purchased the Halloween kit but left it unopened for a year. When she finally opened the contents, she found this chilling letter:

“If you occasionally buy this product, please kindly resend this letter to the World Human Right Organization. Thousands people here who are under the persicution of the Chinese Communist Party Government will thank and remember you forever.”

The graveyard kit, the letter read, was made in unit 8, department 2 of the Masanjia Labor Camp in Shenyang, China.

“People who work here have to work 15 hours a day without Saturday, Sunday break and any holidays. Otherwise, they will suffer torturement, beat and rude remark. Nearly no payment (10 yuan/1 month).”

The article found its way to Reddit, where it inspired a second post about a “Chinese slave labor plea” — found on the cover of a toilet seat, apparently. 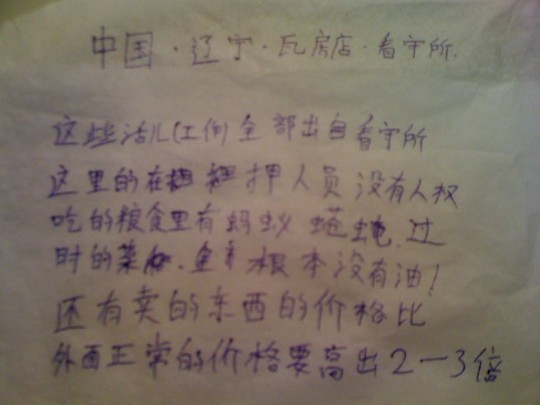 So, there’s no way to authenticate any of these writings, that said, it reads:

All the work here originates from the Detention Center

All people detained here have no human rights

The food we eat have ants and flies in it.

Expired vegetables (could mean food in general). And there’s no oil at all!

There’s a spirited debate on both Reddit threads (more so on the latter) about whether these letters are real. Worthwhile questions are being asked. If either one of these was a hoax though, whoever’s behind it has done one hell of a job, because apparently ICE’s Homeland Security Investigations is currently on the case:

Title 19, section 1307 of U.S. Code generally prohibits the importation of all items ‘mined, produced or manufactured’ in any foreign country by convict labor, forced labor and/or indentured labor.

Julie Keith now checks the label of everything she buys, down to the Gingerbread house she purchased for the holidays. Her friends, she said, do the same.

“If I really don’t need it, I won’t buy it if it’s made in China,” she said. “This has really made me more aware. I hope it would make a difference.”

– which completely skew the reality of global supply chains, the story is nonetheless interesting. Real or hoax? You decide.

Human Rights Watch also took a look at the note.

“We’re in no position to confirm the veracity or origin of this,” Sophie Richardson, China director at Human Rights Watch, told the Oregonian. “I think it is fair to say the conditions described in the letter certainly conform to what we know about conditions in re-education through labor camps.”

For decades, China has run labor camps for alleged troublemakers. Laborers are sentenced to years of work without formal arrest or trial. 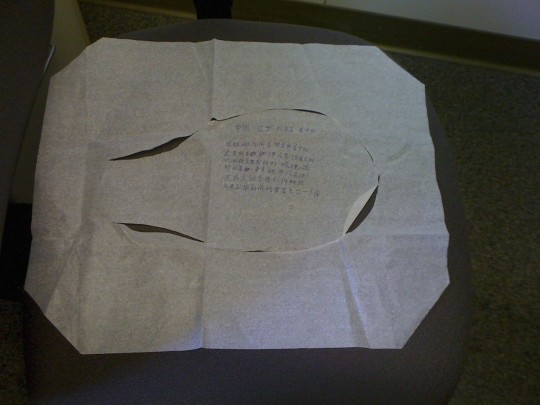 2 Responses to “How A Letter From China Decrying Slave Labor Ended Up In Portland, Oregon [UPDATE]”