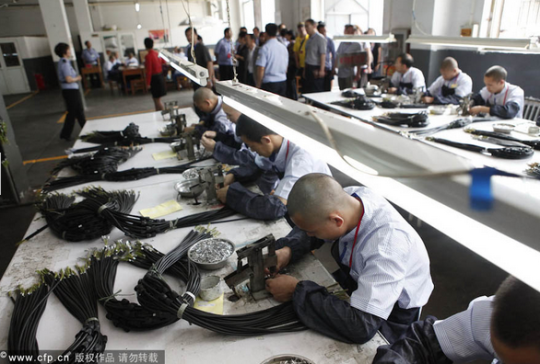 China may finally be reforming its frightening system of “re-education through labor” (RTL), according to state news agencies – but to what extent? While state media initially reported Monday that the CPC Central Committee would be pushing through a proposal to end the system by 2013, officials quickly backpedaled and settled on “reforming” the system, according to China Digital Times.

Since 1957, the system has allowed police to “detain people for up to four years without an open trial,” and has been a convenient way for the government to deal with political dissidents and critics. Yet the Ministry of Justice has been seeking ways to reform it for some time, according to the Dui Hua Foundation’s Human Rights Journal, a US-based NGO that focuses on prison justice in China:

After a brief lull in coverage in the run-up to the 18th Party Congress, the Chinese press has given renewed attention to cases in which RTL has been used in questionable ways. Significant coverage was devoted recently to the cases of Ren Jianyu, one of several individuals from Chongqing who have challenged the RTL decisions made against them for things they posted online, and Zhao Meifu, a 54-year-old woman sent to RTL in Gansu after a visit last month to Beijing, where her son is a university student.

Ren Jianyu spent 15 months imprisoned without trial for criticizing disgraced politician Bo Xilai, while Zhao Meifu was a Lanzhou land-grab petitioner who was sentenced despite her frail health. These two cases, along with others (including dubious ones as the “slave labor letter” found in Oregon), have put China’s forced labor system in the international limelight.

As of 2008, according to China Daily, 160,000 people were officially imprisoned in the country’s 350 forced labor camps – the latest data available from the Ministry of Justice. In 2009, the United Nations estimated the figure was closer to 190,000 detainees at 320 camps. For the entire country, the International Labour Organization reports around 11,700,000 people worked in forced labor conditions in China in 2012, a figure that includes everything from the sex trade to manufacturing.

While China’s critics are viewing the latest announcement with skepticism, we have seen official criticism of forced labor, however tacit, within the legal community. According to Dui Hua’s translation of the Xiaoxiang Morning News:

“Something that originally was supposed to be done together by civil affairs, public security, and labor [bureaus] is now being done by public security alone,” says Peking University Law School Professor Jiang Ming’an. This situation where “the player is also the referee” has long been the subject of public criticism.

“Although they are convenient for public security organs to use, in actual practice the procedures aren’t clear, which leads to all sorts of problems,” says one legal scholar. The mutation of the RTL system has not only turned it into a stability-maintenance tool for controlling petitioners but also become a hotbed for avoiding the risks involved in handling cases and blending interests.

Meanwhile, human rights organizations are continuing calls for a total abolition of the system.