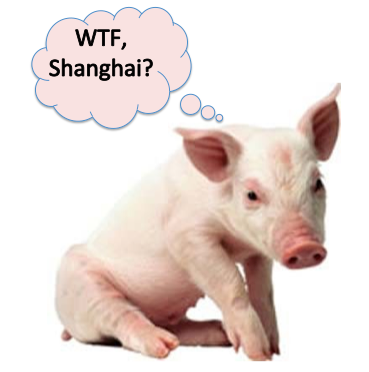 Seriously, now: forget the jokes, forget about water safety concerns, forget everything until this question is answered: what possibly could have gone through the mind of the homicidal pig farmer who dumped more than 6,000 pigs into the Huangpu River?

Did a pig farm explode? Does circovirus cause pigs to go mad and jump in water, as if they were on fire? Is it us who have gone mad? Have a look, this is how we’re talking about the dead pig-count nowadays:

By 3 pm Wednesday, 685 dead pigs had been fished from the Huangpu River, 43.8 percent fewer than the day before, and raising the total number of swine carcasses to 6,601, said a statement released by the Shanghai municipal government.

A 43.8 percent decrease of an increase in the number of dead pigs.

You know what’s really fucked up? Officials are now talking about dead pigs as if it was normal:

“This is not the first time we have found dead pigs. Farmers in the neighboring Zhejiang Province habitually throw them into rivers, putting Shanghai at risk of water pollution,” Xu Yonghua, a deputy director with the Jinshan district water authority, told the Global Times.

What? That’s CRAZY. I don’t know what else to say. Only an insane person would hear that and not scramble for the nearest shotgun or pitchfork. Play those words back in your mind: Farmers HABITUALLY throw DEAD PIGS into the water, putting Shanghai AT RISK OF WATER POLLUTION.

Ear tags that identify a pig’s place of birth are showing that many were born in Jiaxing, Zhejiang. Recovered tags led authorities to a pig farmer in Jiaxing who was detained Wednesday for investigation after admitting he had thrown pigs in the river.

After disposing of more than 6,600 bodies — a number that is still increasing by hundreds every day — he loses his mind like the butcher’s assistant after skinning Luohan in Red Sorghum, right? Or maybe not. Because we are all crazy, because this world is.

Previously: “Pigfestation” Is What We’re Now Calling It, Because Nearly 6,000 Dead Pigs

One Response to “The Farmer Responsible For Dumping 6,601 (And Counting) Swine Carcasses Into Shanghai River Has Been Detained”