Beijing is again king of Chinese basketball. The Ducks beat the Xinjiang Flying Tigers 98-88 tonight in Urumqi, clinching the CBA championship 4 games to 2. Stephon Marbury and Randolph Morris, who played so shockingly poorly in Game 5 in Beijing that I heard more than one person say they threw the game (14 points each, combined 7 for 38 from the field), redeemed themselves by scoring 28 and 30 points, respectively.

Allen Iverson and Jason “White Chocolate” Williams were among the more famous basketball players in Beijing on Saturday to take on the defending CBA champs in an exhibition at Beijing National Stadium. (No Dennis Rodman this time.) The Ducks beat the American “All-Stars” 132-103, but all anyone could talk about afterwards was the “juke” that... Read more » 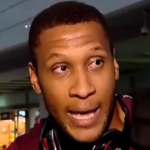 While Stephon Marbury usually commands all the attention, Beijing has a pretty good second foreigner on its basketball team in Randolph Morris. Last year the 6'11'' power forward/center averaged 23.8 points and 7.1 rebounds over the season, and hit the go-ahead free throws with 21.9 seconds left in the championship-clinching Game 5 vs. Guangdong in March. The team re-signed him in the off-season, and yesterday evening, Morris arrived back in town.