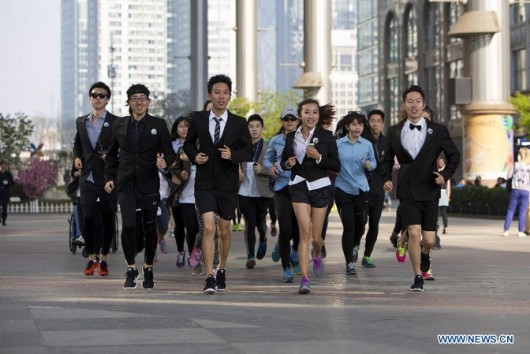 Via Xinhua: “Participants of ‘Running in suits’ run by way of The Place in Beijing, capital of China, April 7, 2014. An activity themed on ‘Running in suits’ calling for office workers to do exercises was held in Sanlitun on Monday.”

Taiwan protest wrapping up. “The student-led protest in Taiwan opposing a services trade pact with the mainland will end on Thursday, after demonstrators pledged to leave the parliament building they have occupied since March 18. // The planned departure was welcomed by Taiwanese President Ma Ying-jeou, whose decision to have the pact reviewed and ratified by the legislature before the end of June sparked one of the island’s biggest protests.” (SCMP)

Chinese people in Malaysia will be big news for at least a few more weeks. “A tourist from south China’s Guangdong Province drowned at sea while he was swimming off the holiday island of Perhentian Besar, the Malaysia-based The Star Newspaper reported today. // Liu Feng, 31, had gone to sea with his wife and two friends to swim and snorkel at around 5pm yesterday, according to the newspaper.” (Shanghai Daily)

American football! “‘American football in China’ is a sport/location combo that at first sounds like a joke, like ‘Jamaican bobsled team.’ But according to the rule that, in a country of 1.3 billion people, everything is happening somewhere, the existence of Chinese football should come as no surprise. Unlike basketball, which missionaries brought to China in the late nineteenth century and which has long enjoyed government support (Chairman Mao was a fan), football is a recent import. It doesn’t come close to breaking into the country’s top ten sports. Even the term in Mandarin—’olive ball’—sounds awkward. But it is here and growing fast. The NFL first set up a China office in 2007 and started a flag-football league that has grown to more than 36 teams. Meanwhile, a raft of amateur tackle clubs has materialized, including, as of summer 2012, the Chongqing Dockers.” (Christopher Beam, New Republic)

Laowai lands plane in highway. “It’s not every day that a plane pulls up to the pump at a gas station. // But that’s what passersby in Beichuan, a small town in north Sichuan notable only as the epicenter of the 2008 Wenchuan earthquake, saw. Baffled locals report that in the morning they watched as a small plane landed on Liaoning Dadao and turned into a roadside gas station to refuel.” (Go Chengdoo)

If you’re wondering why (Sina) Weibo is losing to WeChat: “About ten million users generated 94 per cent of all messages on Sina Weibo, according to one study by Fu King-wa, assistant professor at the Journalism and Media Studies Centre at the University of Hong Kong, while some two hundred million other users mostly just ‘re-tweeted’ those posts.” (SCMP)

Asian Americans succeed because they have high standards, not crazy mothers. “Young Asian Americans have all kinds of good role models to emulate. Their communities and families make sure they get extra help when they need it. Their families, even on limited resources, manage to seek out and move to neighborhoods with good schools. And they aspire to success with specific goals in mind: medicine, law, engineering and pharmacy. And they aim for the best schools.” (Washington Post)

Shenzhen prepares for rats. “One of the urban legends about cities is that you are never six feet away from a rat, and this may be particularly in Shenzhen as the city’s center for disease control and prevention (CDC) revealed that the density of rats in the city will increase five to six-fold this year from 2013 levels, Yangcheng Evening News reported on April 8.” (The Nanfang)

Snooker. “Snooker may not be everybody’s cup of tea, but it’s perhaps the best example of the Chinese taking over a sport in a short space of time. Since Ding Junhui won his first China Open title in 2005 as an 18-year-old (he added his second on Sunday), the sport has grown so much here that there are now 13 Chinese in the world’s top 100 players, and five of the season’s 11 full ranking tournaments now take place in China. In TV viewing terms, it’s now firmly established in the second tier of sports (with basketball and soccer the only true Tier 1 occupants).” (China Sports Insider)

Cantankerous elder. “A man in his 70s has been released on bail after punching a cop in the face for stopping him from jaywalking in Jinshan district, Chinese media reported Sunday. // The police officer tried restraining the suspect, who was not identified, around 8:30 am Saturday after the elderly man refused to wait for a green light before crossing the street, according to a report on China Central Television Station (CCTV).” (Global Times)

How much does a movie ticket cost in Beijing compared to other cities? #timeoutbeijing RT @1bfans pic.twitter.com/lf4KjSYZ7w

“Interview: Emily Parker, author of Now I Know Who My Comrades Are.” (Shanghaiist)

“Suicide and despair in Yayoi Kusama’s art” (which was on display in Shanghai). (The World of Chinese)

“Is this the narrowest toilet entrance in China?” (That’s Online)

“Lawyers Say They Were Tortured After Protesting ‘Black Jail.’” (Sinosphere)

Via Ecns.cn: “A hostage taking incident occurs in Xishan district of Kunming, southwest China’s Yunnan province on April 8, 2014. A woman, taken hostage by a knife-wielding man, was finally rescued by policemen”: 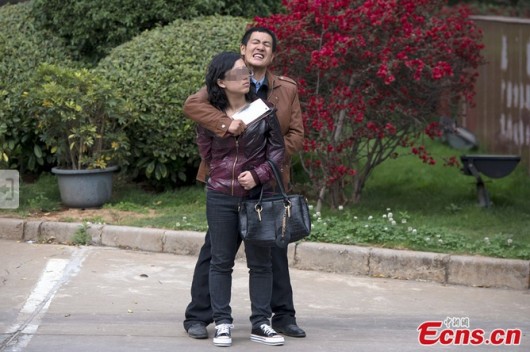