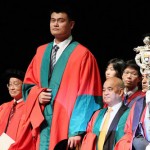 All-around good guy Yao Ming was at the University of Hong Kong on Tuesday to receive an honorary doctor’s degree for his work in promoting HIV/AIDS awareness. We don’t want to take anything away from Yao’s accomplishments or scoff at HKU, but Jesus, what’s up with the gold Roman Catholic scepter? Yao, meanwhile, was recently interviewed by... Read more »