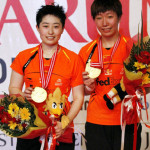 Yu Yang and Wang Xiaoli, who were robbed of their chance to compete for a gold medal at the London Olympics when the Badminton World Federation disqualified them (and three other teams) for intentionally trying to lose, were honored by the China’s General Administration of Sports on Friday. Yu and Wang were among 100 players to... Read more » 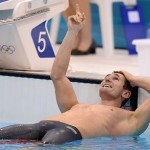 In an article published Saturday in the Sydney Morning Herald, South African Cameron van der Burgh admitted to cheating in his world-record-setting swim in the 100-meter breaststroke. Swimmers are only allowed one dolphin kick after entering the water and one kick after the turn, but van der Burgh copped to taking multiple — because “every swimmer does that,” he... Read more » 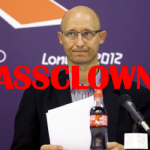 Was a note proving injury all that was required to get the world’s No. 1 badminton team of Yu Yang and Wang Xiaoli reinstated after their high-profile disqualification for match-fixing (and the DQs of three other teams)? I’ve emailed Thomas Lund, t.lund@bwfbadminton.org, and the Badminton World Federation (BWF) to find out, and will report back if... Read more » 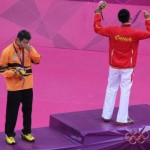 China’s Lin Dan beat Malaysia’s Lee Chong Wei 15-21, 21-10, 21-19 earlier today, becoming the first person to repeat as Olympic men’s badminton champion (he also beat Lee in the 2008 finals). That in itself could establish him as the best male badminton player of all time, but then you consider his 48 career titles, including four... Read more » 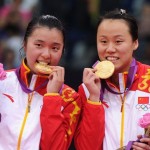 Yu Yang and Wang Xiaoli were disqualified for match-fixing because they wanted to avoid facing Tian Qian and Zhao Yunlei in the semifinals, and now we know why. Tian and Zhao just won the gold medal, never dropping a set in any of their three knock-out round matches. They beat Japan’s Mizuki Fujii and Reika Kakiiwa 21-10 25-23.... Read more » 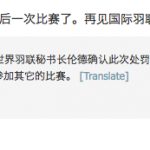 Yu Yang’s retirement announcement Hold the phones, everyone. This story isn’t as straightforward as we thought, and it doesn’t seem like Yu Yang completely agrees with the Badminton World Federation’s decision to disqualify her and teammate Wang Xiaoli for match fixing. (Also, she announced her retirement on Tencent Weibo, but we’ll get to that in a... Read more » 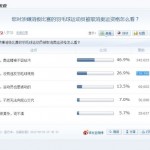 When the Badminton World Federation (BWF) announced yesterday it was disqualifying four teams from the women’s doubles competition for trying to lose, including the world’s top team, China’s Wang Xiaoli and Yu Yang, I have to admit my first reaction was fear that this would create more controversy than it would resolve. (Here are match “highlights.”)... Read more » 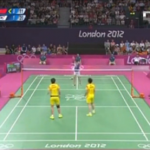 Courtesy of Sina, here’s actual Olympic footage! UPDATE, 12:06 pm: They’ve disabled the embed. But you can watch on Sina’s website if you’re within the mainland. The players in the above have, as reported, been disqualified from the tournament. The Indonesian team withdrew its appeal, and the two South Korean teams’ appeals were rejected, according to... Read more » 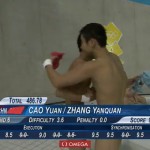 If you’re not up to speed on badminton’s big scandal, first go read this. And then realize that the IOC and Badminton World Federation just dropped the biggest bombshell of these Games by disqualifying four pairs of teams from the quarterfinals for match-fixing, including two teams — both South Korean (what is it with South Koreans... Read more »