The "emergence" of punk, in 2008, was a social interest story, as international media arrived in Beijing for Olympics coverage but "discovered" Chinese rock. It's different now, as Nevin Domer, COO of Maybe Mars and founder of Genjing Records, explains in our latest episode of The Creamcast. 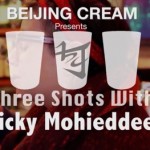 Welcome to Three Shots with Beijing Cream, where local personalities may or may not get drunk on camera, depending on their alcohol tolerance. Produced and directed by Gabriel Clermont and Anthony Tao. Vicky Mohieddeen arrived in China halfway by accident with no long-term plans, but in an opportunity-rich place like Beijing, it didn't take long for her to find a calling. Or several, as it were.

Long-time Beijinger and The Local owner Kenn Burmel enlightens hosts John Artman and Amy Daml on why his bar is no longer called Brussels, how he survived SARS locked into his dorm (people had a lot of sex), and what exactly propelled The Local to an improbable 2nd-place finish in last year's the Beijinger Burger Cup (including a shocking -- shocking -- victory over Blue Frog).