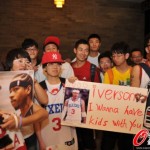 UPDATE, 9:37 am: My headline originally misidentified the gender of the person holding the “kids” sign (upon closer inspection, as pointed out in the comments section, the person holding the sign does not look to be a dude after all). Everything makes a lot more sense now, though at the cost of being funny. Allen... Read more » 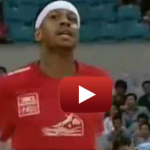 Former NBA stars Allen Iverson and Dennis Rodman were in Cixi, Zhejiang earlier this week to scrimmage against the Beijing Ducks, which still has (the newly minted) Stephon Marbury, as part of an eight-game, multi-team tour. One Beijing player said it was a dream to play against AI. Ducks coach Min Lulei, however, had no use for such sentiment. He chided his team in the post-game press conference for not taking the opening game seriously enough, which strikes me as just silly -- the Ducks are a month removed from winning the CBA championship, and they haven't practiced together since.