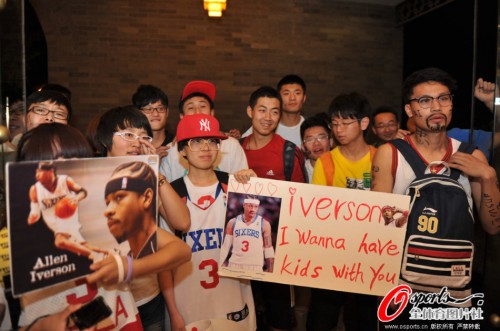 Allen Iverson and his touring teammates landed in Taiyuan, Shanxi yesterday, a place with notoriously rowdy fans who are… well, let’s just call them unorthodox. Jon Pastuszek over at NiuBball is all over this. The headline to his post is classically understated: “Some fans in China like Allen Iverson a little too much…”

After Michael Jordan and possibly Kobe Bryant, A.I. is easily the most popular all-time NBAer in China. During the trip, he has been met by flocks of fans who wait at airports, hotels, restaurants, promotional events and stadiums with the hope that they can catch a glimpse of their beloved Answer.

In this sign below, I wonder what word the “I” is supposed to be. Imperial? But that fourth letter is definitely an “a.” Did she mean nonpareil, just didn’t know how to spell it?

Either way, a man as difficult to understand as AI deserves fans who are also slightly off kilter. China needs AI. It works the other way, too. 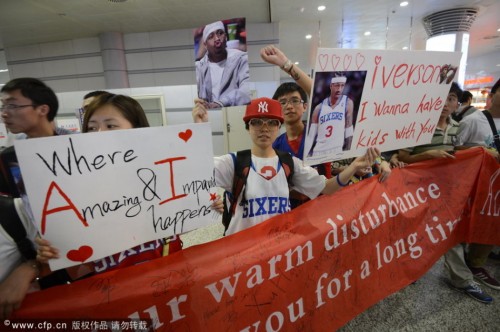