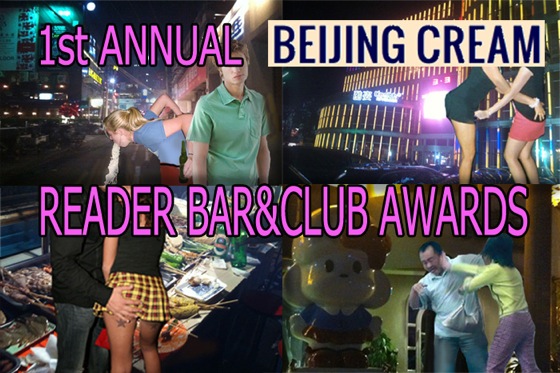 We’ve complained about the snobbishness of Time Out’s food awards, and noted that City Weekend’s attempts to promote its awards can probably do without an Ashley Tisdale soundtrack. Where does that leave us?

Ah, yes, the Beijinger. Top dog for nine years, king of Beijing’s nightlife scene, like Hong Xiuquan reigning over Taiping Heavenly Kingdom. Voting is open until Wednesday in tbj’s thing, in 32 different categories, they tell us, but do we really need to know who has the best mix drink and the best bartender? We want the dirt, Beijinger. We want to commix with the salt of the earth, intoxicating ourselves in vomit and sex, the smell of. But the most “edgy” question you offer is hottest wait staff, and the people voting in that one may as well be voting for Best Den for Lechers. Other questions you fail to ask:

Luckily, we’re here. Beijing Cream’s Bar and Club Awards feature 22 questions divided into five categories, plus a bonus question in a sixth category at the end. The ballot is embedded after the jump, where you can also take a look at the complete list of questions. Voting is open until Wednesday, May 16. We’ll give you plenty of reminders in the coming days.

BONUS QUESTION (in the survey only)

9 Responses to “The 1st Annual Beijing Cream Bar And Club Awards, Where (Almost) No One Is Spared”