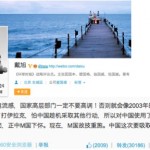 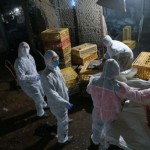 Poutry market in Shanghai shut down, via Sina This was going in tonight’s links post, but why wait?

A third death has been confirmed from H7N9 avian influenza: a man from Zhejiang province perished yesterday after falling sick earlier in the week. In light of that, Xinhua has issued a public advisory urging people to not slaughter poultry during Tomb-Sweeping Day, which begins today:

This will be fun: let’s track new cases of bird flu, specifically this new, confounding H7N9 strain. Four more cases have been reported by a health bureau in Jiangsu province, according to AP. It remains non-contagious and not actually caused by birds. The health bureau of eastern Jiangsu province said in a notice on its... Read more »

Move over, H5N1. There’s a new strain of bird flu that can infect and kill humans — though currently it does not appear to be contagious. Xinhua reports that three humans came down with H7N9 avian influenza recently in Shanghai and Anhui province. The two from Shanghai are dead, while the other, a 35-year-old woman from... Read more »