A goalkeeper makes dozens of decisions over the course of every match, from how to position himself to whether to attack or sit back on incoming crosses, and the slightest miscalculation can sometimes be the difference between a win and something lesser. Never will this point be more obviously illustrated than during Sunday’s Chinese Super League match between Chongqing Lifan and Liaoning Hongyun, when Chongqing goalkeeper Sui Weijie’s crucial decision to take a sip of water cost his team a victory.

In the 84th minute, Chongqing was up 1-0 when it committed a foul just outside its box. While Chongqing’s defenders are pleading their case around the referee, Liaoning’s Ding Haifeng quick starts the free kick, taking everybody by surprise — most of all Chongqing’s goalkeeper, who was sipping from his water bottle when the ball rolled into his unmanned goal.

This is the face of a man who knows he done screwed up and will sleep a lonely sleep: 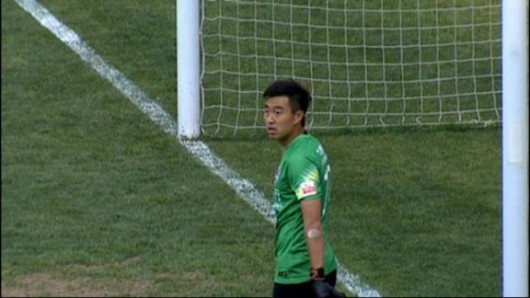 The funniest part, by far, is the reaction of the Chongqing manager, who can’t even be all that mad at his keeper since it looks like he was caught just as unawares… and equally thirsty:

(Via Fail Goal via Who Ate All the Pies)

One Response to “Chongqing Goalkeeper Concedes Goal While Drinking Water”