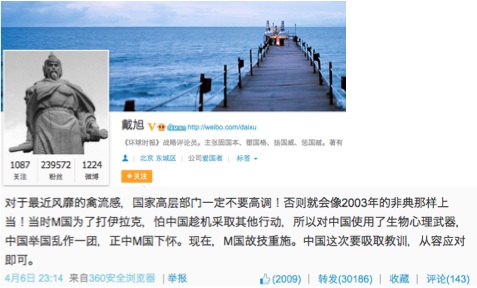 A senior colonel in the People’s Liberation Army apparently thinks the H7N9 avian flu virus is an American biological weapon unleashed for the suppression of the Chinese people, or something. As relayed by SCMP’s Patrick Boehler:

“The national leadership should not pay too much attention to it,” Dai Xu, senior colonel with the People’s Liberation Army’s air force and lecturer at the National Defence University, wrote on his Sina Weibo micro-blog on Saturday. “Or else, it’ll be like in 2003 with Sars!”

One’s first reaction is that not paying attention to it is precisely “like in 2003 with SARS,” and that’s terrible. But Dai clarifies:

At that time, America was fighting in Iraq and feared that China would take advantage of the opportunity to take other actions. This is why they used bio-psychological weapons against China. All of China fell into turmoil and that was exactly what the US wanted. Now, the US is using the same old trick. China should have learned its lesson and should calmly deal with the problem.

Dai was unapologetic in his reply on Sunday. “It is common knowledge that a group of people in China have been injected with mental toxin by the US,”he wrote.

“Now, a group of fake American devils are attacking me,” he wrote in another post. “I will not retreat even half a step.”

We hate to break this to him, but people in America, devil or not, real or fake, generally do not care to reply to, much less attack, crazy people’s opinions.

But Dai did accompish something. Since his tirade, he’s gained 40,000 followers on Sina Weibo.