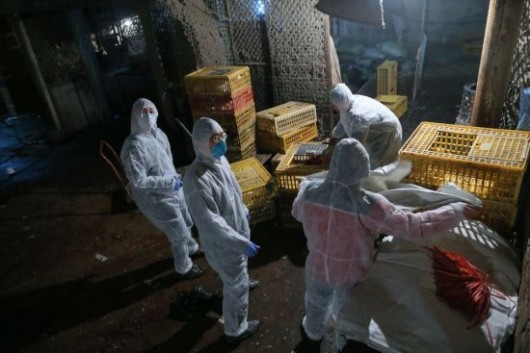 Poutry market in Shanghai shut down, via Sina

This was going in tonight’s links post, but why wait?

20,000 chickens culled. “Officials have closed Shanghai’s poultry market and slaughtered more than 20,000 birds as the death toll from a new outbreak of bird flu rose to six.” (Guardian)

Yes, six. “According to the health bureau, the 64-year-old man surnamed Zhang, who is a peasant farmer of Huzhou City, died at hospital after rescue efforts failed on Thursday night and it was confirmed he was infected with the H7N9 strain. // So far, 55 people who had a close contact with Zhang have shown no abnormal symptoms.” (Xinhua)

According to Shanghai officials, the city will temporarily close all 460 of its poultry markets starting tomorrow. #H7N9

Hong Kong. “The seven-year-old has become the first suspected case of the H7N9 bird flu virus in Hong Kong. // The girl has now been put in an isolation ward in Queen Elizabeth Hospital for further observation to confirm whether she has contracted the virus.” (SCMP)

Panic! “Hong Kong shares finished a holiday-shortened week at their lowest close since Nov. 28, as fears of a bird flu outbreak sparked a broad selloff, and further falls looked possible after the benchmark index broke below a key technical support.” (Reuters)

Good news though: “The World Health Organization said on Friday there was no sign of “sustained human-to-human transmission” of the H7N9 virus in China, but it was important to check on 400 people who had been in close contact with the 14 confirmed cases.” (Reuters)

Hang in there, folks. Maybe postpone your chicken-coup field trip for the meantime.