From John Metcalfe of Atlantic Cities: At roughly 3,850 feet long and 1,150 feet high, the bridge is the longest and tallest tunnel-to-tunnel bridge ever built. From every angle, it looks like it shouldn't exist – or should, just as a broken heap of twisted metal at the bottom of the valley. It's a natural magnet for anybody who likes doing improbable things off of intimidating structures.

Frenchman Jean-Yves Blondeau is known as "Rollerman" because of his custom-designed suit equipped with 31 skateboard wheels, ensuring he always rolls -- standing, crouching, prostrate -- wherever there's a hill. But why roll down hills when the world offers mountains? Specifically, Mt. Tianmen, one of the most scenic places in China, featuring a stretch of road -- which Alicia wrote about in April -- with 99 turns to symbolize Heaven's nine palaces. 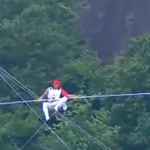 Yesterday, on a hot and windy day at Shiniuzhai Scenic Resort in Pingjiang, Hunan province, Aisikaier, a sixth-generation Xinjiang tightrope walker of the "Dawa Zi" (Uyghur-style high wire) attempted to break a world record by walking 700 meters on a tightrope strung 250 meters above ground at its highest point. Because doing this like a normal acrobat would have been too easy -- he's a Dawa Zi, remember -- Aisikaier chose to do it backwards, blindfolded, and without a harness. 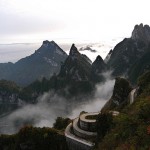 Youku video for those in China after the jump. Remember our post a few days back, “99 Ways to Heaven… on the Highway to Hell,” about a certain stretch of road in Zhangjiajie, Hunan that may be the most dangerous in the world? Well, Jokke Sommer, a BASE jumping and wingsuit expert, decided to take... Read more » 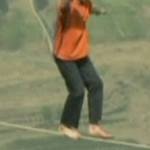 By now, multiple angles of American David Potter traversing the Enshi Grand Canyon in Hubei province are online, but no matter how you look at it -- even knowing he successfully crossed the 40-meter canyon that's 1,800 meters above sea level without falling to his death (because he was wearing no safety harness or parachute) -- it's still harrowing. A slackline, for those who aren't familiar, is different from a tightrope in that there's more stretching, like "a long and narrow trampoline," says Wikipedia.