Big oops, as spotted by Car News China in Shanghai. A Ferrari FF drove into the back on a truck on a bicycle lane. Furthermore; the Ferrari was driven by a laowai (foreigner) with a laowai-chick on the passenger’s seat. It’s not as expensive an accident as a Lamborghini running into a Rolls Royce, but nonetheless… OOPS. 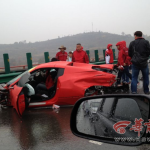 Stop me if you’ve heard this one before: a group of Ferraris road race on a Chinese highway; crash; disintegrate into a thousand pieces. Around 3:30 pm today on the Shaanxi Baomao Highway in Ansai County, Shaanxi province, witnesses say they saw about a dozen Ferraris traveling at absurdly fast speeds. Two of them bumped... Read more » 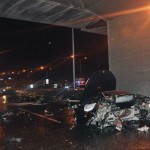 In the predawn hours of March 18, a black Ferrari 458 Spider carrying three passengers crashed into a metal guardrail under Baofusi Bridge on Fourth Ring Road. The driver, a male in his 20s, died at the scene. Two other passengers somehow survived. The driver was identified only by his surname — Jia. It’s a... Read more »
Original Youku video for those in China after the jump. There aren’t many Ferrari owners in China who will win sympathy votes from non-Ferrari drivers for this incident in Shanghai, video of which was posted two days ago. The negative publicity for the Italian luxury car began with Bo Guagua; unfair as it may be, “Ferrari”... Read more »