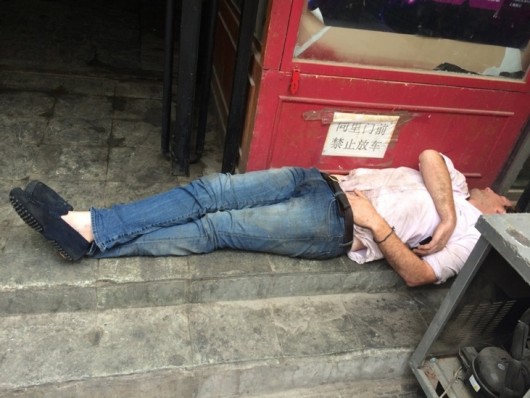 An anonymous tipster sent this picture from the entryway of Tongli Studio in Sanlitun at 12:30 pm. “He wasn’t dead — as he was breathing — and was most likely sleeping a rough night off,” the tipster reports. “Nobody was bothering him as people went about their business coming and going to lunch.”

Could’ve happened to anybody, really. Of course, it didn’t happen to “anybody.” It happened to this guy. At least he had the good sense to pass out underneath Biteapitta, where he can get some strong Arabian coffee to kick off the afternoon.

For those wondering, the sign right above him says vehicles are forbidden.

4 Responses to “Here’s A Foreigner Passed Out In Sanlitun At 12:30 pm”