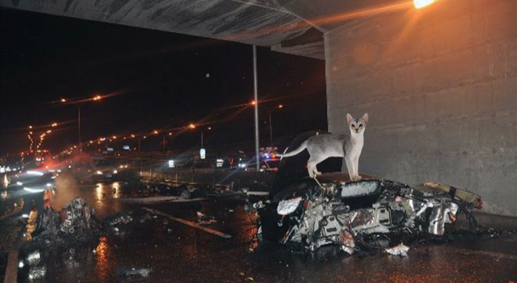 In the predawn hours of March 18, a black Ferrari 458 Spider carrying three passengers crashed into a metal guardrail under Baofusi Bridge on Fourth Ring Road. The driver, a male in his 20s, died at the scene. Two other passengers somehow survived.

The driver was identified only by his surname — Jia. It’s a homonym for fake, and sure enough, as South China Morning Post now reports from behind a paywall, it indeed was. “Some have speculated that it was a deliberate choice to throw people off track,” SCMP writes — that is, off the track of the real driver and onto the track of Jia Qinglin, a high-ranking Politburo Standing Committee member who has an illegitimate son surnamed Jia.

According to SCMP, Jia conducted his own investigation and easily found the driver to be Ling Gu, son of Ling Jihua, who happens to be President Hu Jintao’s principal aide and a hopeful for one of the nine seats on the next Standing Committee.

High-level political intrigue is the best kind, isn’t it?

What have we learned from this revelation?

1. State media knows what it’s doing. Remember when James Fallows wrote about that “astounding article” in Global Times? He was talking about GT’s reportage that information about the Ferrari crash had been “hushed up.” It turns out the censors most likely wanted the hush-up to be publicized, because they knew — absolutely must have known — that such a hush-up would inevitably fan the flames of speculation toward Jia Qinglin. Ling Gu, the actual driver, was never even close to being implicated, which meant Ling Jihua was safe, which meant — more importantly — Hu Jintao was safe.

2. We know nothing. As Mark MacKinnon of the Globe and Mail noted in a March 20 article:

That might have been the end of the story – another tale of reckless driving on Beijing’s roads – if China’s tireless censors hadn’t kicked in and raised suspicions….

Soon, entering the word “Ferrari” on Chinese websites brought you to a dead end familiar to most of the country’s 500 million Internet users: “According to the relevant policies and laws, the search results are not shown.”

After years of living behind the “Great Firewall,” those 13 words are now read by millions of Chinese as code for “there’s more to this story than we want you to know about.”

It turns out that Chinese censors are now using censorship to fan the flames of speculation, not quell it. What a neat trick. We always say the rule-breakers are always a step ahead of the rule enforcers, but what if those enforcers were just as savvy, if not more so, than the people they pursue, and in fact were like cats, merely toying with their prey because the chase will always be more fun than the kill?

3. Where censors really needed to thrive, they did. Reports SCMP:

Beijing media sources said they had known for a long time that Ling Gu was killed in the accident, but blanket censorship was immediately imposed.

“It was a gag order at the highest level. I have never seen any car accident that deserves an order of this level,” a senior Beijing state media source told the Post.

The Global Times piece wasn’t an accident. High-level editors in the mainland are beholden to the Party, always remember that.

Some more details: apparently Jia Qinglin gave the result of his private investigation to Jiang Zemin, who reportedly sat on the report for nearly three months. And then…

On June 12, days after Ling Gu was identified by Boxun, Hong Kong’s pro-Beijing Wen Wei Po newspaper reported that Ling Jihua had been elected a party congress representative after capturing all the votes in his constituency, made up of agencies and organisations directly under the central government.

Observers see the timing of the Wen Wei Po report as a sign that Hu is backing Ling to sail through the political storm. A day earlier, Xinhua published a speech by Ling after his election.

Sources said that after the accident, Ling reportedly argued that he spent all his time serving Hu and had no time to look after his son properly.

But the damage has already been done. Ling was once tipped as a “dark horse” for elevation to the Politburo Standing Committee at this autumn’s party congress, which would have ensured Hu maintained his influence after his retirement.

But analysts said the best Ling could hope for now was to become one of the 24 full members of the Politburo. Saturday’s reshuffle seemed to suggest even this has become difficult.

So the final two lessons:

4. The public is a pawn in the great chess game of Chinese politics. Xinhua publishes a speech by Ling, and that act tells us more than anything the content of the speech — or Xinhua itself — ever could.

5. We know nothing. Let me get this straight: Hu Jintao didn’t know the real identity of the driver for nearly three months, yet someone felt the need to protect him by steering speculation toward Jia, who happens to be one of the most powerful men in the Communist Party? Something else is going on here.

All we can do, should we choose to, is speculate, as if that’ll get us anywhere.

6 Responses to “Remember This Scorched Ferrari In Beijing? Ling Jihua And Hu Jintao Sure Do”