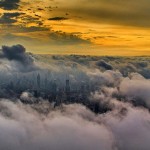 Wei Gensheng is a professional crane operator. Maybe he should think about changing professions, because these pictures are breathtaking, probably the best we've seen of Shanghai's skyline. Wei won second prize at the Shanghai City Photography Competition with these, which were snapped 2,000 feet (610 meters) above ground on the Shanghai Tower. (The building will be the world's second tallest, behind the Burj Khalifa, when it's completed later this year.)

Shanghai, China’s financial hub, appears determined to compete with Beijing, China’s political epicenter, in every aspect, including pollution. Starting Thursday, smog has shrouded Shanghai and nearby provinces, with PM2.5 readings shooting from 200 micrograms per cubic meter to as high as 700 at some air quality monitoring stations. As of 1 pm Friday, the average PM2.5 reading in Shanghai reached an off-the-charts level of 602.5; the PM10 reading reached 671, with the highest reading recorded at 726 in Putuo district.