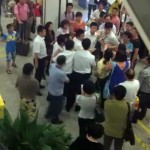 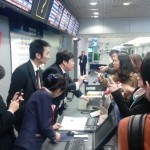 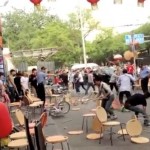 Guijie, the prominent dining street on Dongzhimen Inner Street in Beijing, was the scene of a terrifying brawl on Sunday around 5:30 pm, according to the description on the above video, recently uploaded by Ai Weiwei. There are scant details, but the description also says the fight was between Han Chinese and Tibetan street peddlers/stall-keepers. There are lots of projectiles. 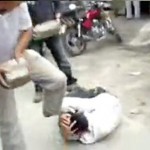 Here is 3 minutes, 17 seconds of two men getting the shit kicked out of them. Right here, the epitome of the expression "beaten within an inch of one's life." It's brutal and vicious -- and then the concrete blocks come out. The two men lying prone on the ground were apparently thieves, but quoting the top commenter on the Youku video -- "Even beatings have a limit, it's not worth beating them to death." We're gonna go ahead and slap a viewer discretion advisory on this one. Screenshots for those who would rather not click play: 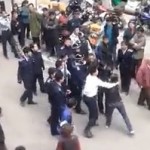 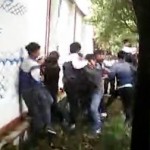 Three separate incidents involving underaged fighters drew a collective 93,000 views on Youku this week. Check out the last video, in which rocks are introduced by a third party and the combatants, as if in Hunger Games, momentarily ponder whether they want this escalation. 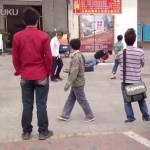 The first fight, between the ladies, is in Bengbu, Anhui province. The second one happens in Hong Kong. Zou Shiming would not be proud. 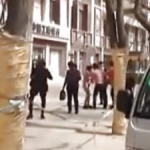 A woman was stripped and beaten in public on Sunday morning in Lanzhou, Gansu province, just outside her residential compound, with her four-year-old daughter present. She was jumped by five women who were reportedly out to teach her a lesson for committing adultery. Hug China has the story: 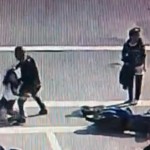 No information available on this one, and none necessary, really. A woman on a scooter trying to run a red light gets clipped by another scooter, and then a fight breaks out. He tries to kick her in the head a la CM Punk, while she goes for the small package, i.e. inside cradle. More mixed gender tussling ensues, like we're back in the Attitude Era. Good times. 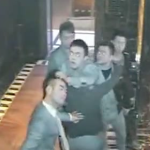 “Some day, my son, you are going to learn that the two greatest joys of being a man are beating the hell out of someone and getting the hell beaten out of you, good night.” --Richard Price, The Wanderers