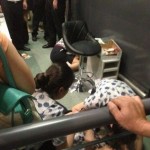 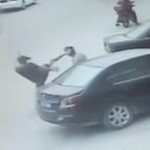 Certain people in Shijiazhuang, Hebei province have been petitioning for more than a year for legal action to be taken against corrupt Party members in their small village (this was before the government's latest enabling of online petitioning, of course). Recently, authorities responded: by sending in the goons. 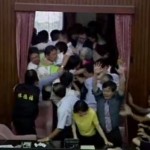 It could be that I have absolutely no understanding of Taiwan politics, but holy catfight! "Members of the ruling party and opposition party fought for control over the rostrum, ahead of a scheduled discussion on the Fourth Nuclear Power Plant referendum," Taiwan-based The China Post explained. Taiwan's legislature is notorious for its brawls between legislators -- i.e. elected adults who are supposed to be the representatives of a democratic, civil society -- but this recent fight brings politics to a new level: pinching, shrieking, hair-grabbing, pushing, crying. And whatever is happening here: 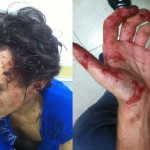 Anything you can do, we can do better? We have resolutions, it seems, to two recent unrelated cases of assault that made the news. 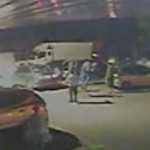 The latest case of chengguan violence comes from Ganzhou, Jiangxi province, where officers reportedly beat up the boss of a restaurant and his family and acquaintances. On June 9, after a meal, chengguan went to the parking lot and found a car blocking its way. They demanded that the vehicle be moved "within three seconds." The restaurant's boss came out, but unable to move the car within three seconds, he suffered a beatdown. 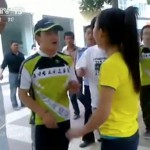 Even while bashing the institution of urban management and enforcement -- so neatly summed up in one word, chengguan -- we acknowledge that the officers tasked with urban bureaucracy -- keeping street peddlers X meters away from the curb, making sure businesses have proper licenses, etc. -- do unenviable and difficult work. Keeping in mind that every time we see a video of chengguan beating the snot out of someone, the chengguan have their side of the story, too (and their side of the story probably has another side as well), let's examine one particular case from a few weeks ago in Yan'an, Shaanxi province, featuring a chengguan jumping on the face of a bike shop owner who was wrestled to the ground. 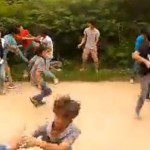 Check out the dude casually smoking a cigarette at the 7-second mark. There are at least two jumping kicks, so this is good entertainment. Alas, the fight ends much too fast. The spectators probably didn't get their money's worth.

On the afternoon of May 31, chengguan in Yan'an, Shaanxi province reportedly got into a scuffle with merchants. The video that was posted to Youku shows the civilian eventually being surrounded by urban management officers, with one particular chengguan -- the fat one, natch -- delivering a terrifying two-footed stomp on his head. Witnesses say the chengguan smelled like he was drunk. 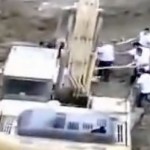 When you live on government land, what's yours isn't really, since it can be taken away in a whim. Of course, all land in China technically belongs to the government, so no one, in effect, can claim for him or herself that most basic of Maslow's needs, shelter. Which is perhaps why the issue of demolition in China is such a tinderbox, ready to explode with cries about fairness, justice, and -- forbid -- a government's scope of power. 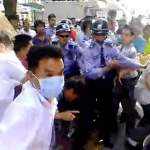 The facts behind this video are unverified, but people on social media are claiming that a gang of hired goons was recently released on the relatives of a deceased patient at Maoming Traditional Chinese Medicine Hospital in Maoming, Guangdong province. It's not clear exactly what grievance, if any, the patient's relatives are filing (or trying to), or what set off the fracas (fists start flying at the 50-second mark, after a chaotic buildup with lots of shoving).