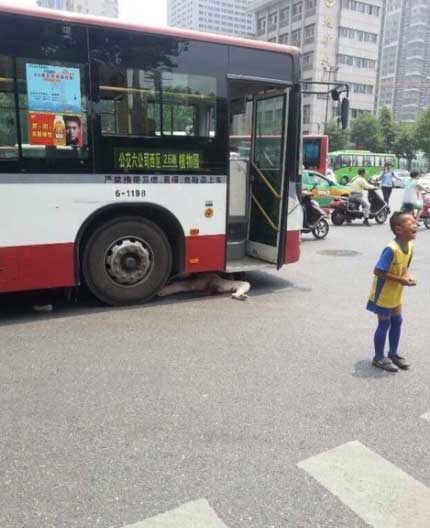 – Hey, everyone, look! A grandmother is trapped underneath that bus!

Sinopathic has this story, which took place in Xi’an, Shaanxi province:

Here’s a statement released by the Beilin district traffic officer responding to the scene, Li Zhan:

“At the time of the incident, an elderly woman aged approximately 60 years of age was crossing the street with her grandchild when she was run over by the #26 public transit bus and became trapped underneath as a result. Due to the fact that the flow of vehicular and pedestrian traffic here at the Nanshaomen intersection is heavy, many passing pedestrians stopped in their tracks to witness the accident; there were even some people who took out their cell phones to repeatedly take pictures. However, no one called 120 (the police emergency services hotline). I immediately went to assess the situation of the victim and then called 120 myself. I then kept in contact with the victim and had her stay calm. [For her part,] the old woman repeatedly urged me to look after her grandson.”

The victim was taken to an air force hospital; there was no further word to her condition.

Grandmother Trapped Under Bus, Bystanders Busy Taking Pictures to Explain Why No One is Helping Her (Sinopathic)