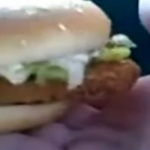 I don't know why, but this made me laugh. Maybe it's the extra-nasally way the man pronounces the J in Beijing. Maybe it's because I feel like he's ready to vomit the words "chicken burger," such is his rising disdain. Maybe the title of the video itself -- Crazy McDonalds employee sells Sloppy Beijing Burger. Or maybe it's the idea of him turning off his camera, getting out of his car, and marching straight back into the McDonald's to return the burger, like he said he would... or the thought that he just might not turn the camera off while he does this. 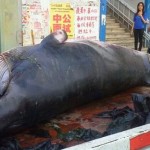 Earlier this week, students at the Shandong Institute of Business and Technology went on Weibo to complain about their food tasting “sour, tart,” according to an article on the website 21food.cn. And why would food taste like that? The picture above is not some random dead whale, but the whale served up at the Shandong... Read more » 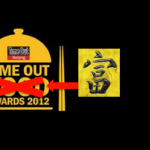 I think this sentence about sums it up: Note: All categories designated as “Fine Dining” are above 500RMB. Those designated as “Casual Dining” are below 500RMB. I’ll give you one flying guess which restaurant won both Restaurant of the Year and the Readers’ Choice (again). I’ll even give you a hint: It’s Maison Boulud. We had... Read more » 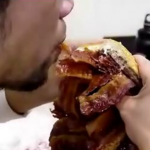 Does China even have 1,050 slices of bacon? If so, they all belong in my belly. (Maybe not. There's a look of post-bacon remorse at the 3:05 mark that's priceless.) 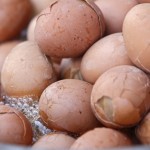 Oh, where do we begin? With the virgins or the urine? With the eggs or the soaking of said eggs in the urine of virgins? How does a story on Reuters -- written by Royston Chan (broaching poaching topics no one else will) -- that begins like this: It's the end of a school day in the eastern Chinese city of Dongyang, and eager parents collect their children after a hectic day of primary school. Get to here: 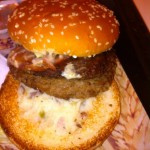 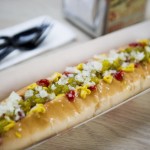 I dunno, maybe you would. I’m just asking. Would you also lick up that limpid runoff along the side of the bun? How ’bout those jellybean dollops of tart hanging off the lip? What if I told you all the above was organic? And that it can be found at Dog on Fire, in Sanlitun? Huh.... Read more »