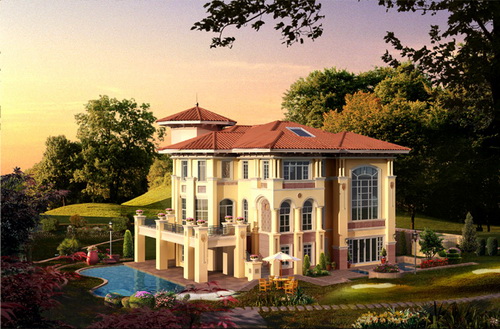 Are you interested in property with garish golden columns and statues of boys urinating, Hello Kitty doorbells and fluffy pink wallpaper? Now’s your chance: the fire sale of all fire sales in now on!

As The Telegraph reports:

Luxury properties are being dumped on the market in Beijing, Shanghai and Guangzhou for anyone able to pay in cash as crooked officials try to cover their tracks.

A report by the Communist Party’s powerful anti-corruption unit, the Central Commission for Discipline Inspection (CDIC), said “a wave of luxury home sales began last November and has accelerated since December”.

…The CDIC report, which was obtained by the Economic Observer newspaper, suggested that nearly 10,000 luxury homes had been sold by government officials in Guangzhou and Shanghai alone last year.

Take the money and run:

It also claimed that an astonishing $1 trillion (£630 billion), equivalent to 40 per cent of Britain’s annual GDP, had been smuggled out of China illegally in 2012.

…The CDIC said 1,100 government officials had fled China during last year’s national holidays in October and that 714 had been successful in getting away.

All this means you too can be the proud owner of a French-style chateau courtesy of the nouveau riche at a bargain basement price. As an added bonus, it’s probably been built on land liberated from the local nongmin who, as they are now destitute, will be happy to act as indentured servants.

Bored? No problem, feel free to entertain yourself in the KTV room or watch soaps of glorious PLA victories in the IMAX theater. If that’s not enough, feast your eyes on these 10,000 bottles of Château Lafite Rothschild from your personal cellar. Why no, we don’t know where they came from.

Hurry! For a limited time only, a year’s supply of white dressing gowns and slippers is included.

7 Responses to “If You Act Now, You Can Be The Proud Owner Of One Of 10,000 Luxury Homes Abandoned By Officials Too Rich To Care”